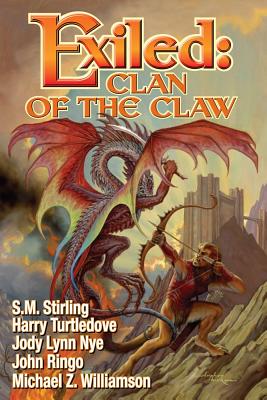 In a heroic, bronze-age world similar to 300, the Mrem Clan of the Claw and its sister warbands are expanding their rough-and-tumble territory, but now they face the Lishkash, masters of a cold-blooded empire of slave armies and magic. It's mammalian courage and adaptation against reptile cunning in a clash of steel and will that will determine which line shall inherit the Earth. About contributor John Ringo:
" O]ne of the best...practitioners. . .of military SF." -Publishers Weekly. " F]ast-paced military SF peopled with three-dimensional characters and spiced with personal drama as well as tactical finesse" - Library Journal " Ringo's work] "attains a terrible beauty not unlike that of the Norse Eddas..." - Publishers Weekly "If Tom Clancy were writing SF, it would read much like John Ringo." - The Philadelphia Weekly Press About contributor Harry Turtledove:
..".the master of alternative SF." -Publishers Weekly "Outstanding enterntainment." -Booklist About contributor S.M. Stirling:
"Stirling eloquently describes a devastated, mystical world that will appeal to fans of traditional fantasy as well as post-apocalyptic SF." -Publishers Weekly on Stirling's The Scourge of God About contributor Michael Z. Williamson:
"Williamson's military expertise is impressive." -SFReviews

Multiple New York Times bestseller S.M. Stirling is a Canadian-American best known for his Draka series of alternate history novels and his Change science fiction saga. Stirling lives in New Mexico. USA Today and New York Times best-seller John Ringo is the author of the landmark Posleen Wars military science fiction series, the Legacy of the Aldenata series, and the Ghost military action-adventure novels. He also co-authored with David Weber the best-selling Prince Roger science fiction series. A veteran of the U.S. Army 82nd Airborne, he brings first-hand knowledge of military operations to his fiction. Hugo and Nebula award-winner Harry Turtledove is often called the dean of alternate history science fiction with a string of best-sellers including his Guns of the South alternate Civil War saga. He lives in California. Popular SF thriller master and creator of the Freehold series Michael Z. Williamson is the author of numerous novels including Do Unto Others, When Diplomacy Fails, Rogue and, with John Ringo, Posleen War series landmark The Hero. Bill Fawcett is the creator of the Fleet series of military science fiction novels with David Drake and the editor of over 300 science fiction and adventure collections and anthologies.