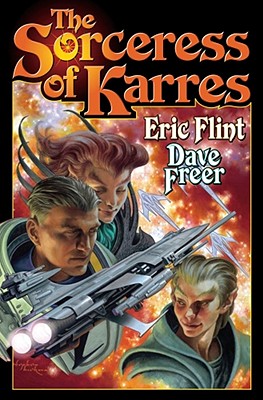 This is book number 3 in the Witches of Karres series.

#3 in the “Witches of Karres” homage series, this is a rollicking romp through the outer reaches of the galaxy.

If he’d known he was getting stuck with a pair of psi-wielding super-beings, even straightlaced do-gooder Captain Pausert might have thought twice about rescuing his two young “witch” charges from slavery on a dark planet.   But what’s done is done – and with galactic peace once again threatened in the mysterious and pirate-ridden Chaladoor region, only a dangerous mission backward in time can save the present and – maybe –  get stalwart-but-obtuse Pausert to see one of these young “witches” as more than just a friend.

About the “Witches of Karres” series:
“Fans of humorous science fiction will enjoy this outing.” –School Library Journal on The Wizard of Karres.

About Eric Flint:
“An SF author of particular note…one who can entertain and edify in equal, and major, measure.” – Publishers Weekly