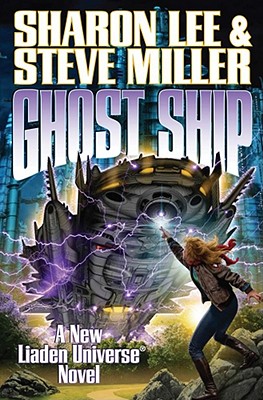 New novel in the Liaden Universe® series.  Over a quarter million copies sold in this series to-date!  Space ships, action, adventure – all tied together with a strong dollop of romance and family saga – make this a compelling series for a wide range of readers, from romance to military SF lovers alike.

Theo Waitley is an ace starship pilot – and pure maverick.  Her mom is a renown Terran scholar and her birth father is an interstellar aristocrat in hiding. Whatever, thinks Theo.  She still feels like a socially-challenged misfit.  But after being selected to train with the best-of-the-best at the pilot academy, she figures she can leave behind those gawky, misfit days of teenage angst that made life so complicated before!   But for Theo, life is about to get even MORE complicated – and deadlier still.  For even though she’s survived the Academy and become one of the best pilots in the galaxy, the past is about to blast her with gale-force winds.  Theo can run, but she can’t hide.  Her destiny as master pilot and leader of a powerful Liaden clan calls, and there are LOTS of enemies who will try to make sure she’s quite dead before she has the chance to make an answer.

“Every now and then you come across an author, or in this case, a pair, who write exactly what you want to read, the characters and personalities that make you enjoy meeting them. . . . I rarely rave on and on about stories, but I am devoted to Lee and Miller novels and stories.” —Anne McCaffrey

“These authors consistently deliver stories with a rich, textured setting, intricate plotting, and vivid, interesting characters from fully-realized cultures, both human and alien, and each book gets better.” –Elizabeth Moon

“[T]he many fans of the Liaden Universe[®] will welcome the latest…continuing young pilot Theo Waitley’s adventures.” – Booklist on Saltation