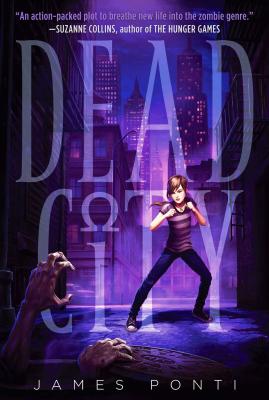 This is book number 1 in the Dead City series.

A tween takes on undead New Yorkers in this paranormal action-adventure that “breathes new life into the zombie genre” (Suzanne Collins, author of The Hunger Games).

Most kids have enough to deal with between school, homework, extracurricular activities, and friends, but Molly Bigelow isn’t your typical tween. By day, Molly attends MIST—the Metropolitan Institute of Science and Technology—but it’s what she’s learning outside of school that sets her apart from her classmates. Molly is a zombie hunter, just like her mother.

This, however, is news to Molly. Now she must come to terms with not only the idea that zombies exist, but also that they’re everywhere, and it’s her job to help police them and keep the peace. Sure, she’d like to be a regular kid, but “regular” just isn’t possible when it turns out the most revered (or feared, depending on your perspective) zombie hunter in the history of New York City is your mother. It seems Molly’s got some legendary footsteps to follow…

James Ponti is the New York Times bestselling author of three middle grade book series: the all-new City Spies, about an unlikely squad of five kids from around the world who form an elite MI6 Spy Team; the Edgar Award–winning Framed! series, about a pair of tweens who solve mysteries in Washington, DC; and the Dead City trilogy, about a secret society that polices the undead living beneath Manhattan. His books have appeared on more than fifteen different state award lists and he is the founder of a writers group known as the Renegades of Middle Grade. James is also an Emmy–nominated television writer and producer who has worked for many networks including Nickelodeon, Disney Channel, PBS, History, and Spike TV, as well as NBC Sports. He lives with his family in Orlando, Florida. Find out more at JamesPonti.com.