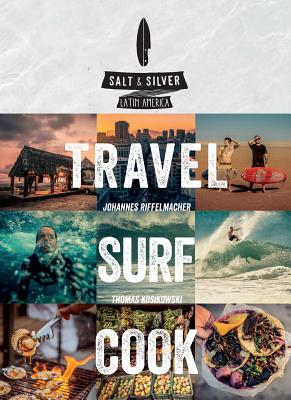 By Johannes Riffelmacher, Thomas Kosikowski
Email or call for price.
Out of Print

Salt & Silver is the first book to blend traveling, surfing, and the food cultures of Central and South America together through the travel stories of two young, adventuresome guys.

Salt & Silver traces the journey of Johannes Riffelmacher and Thomas Kosikowski as they travel through Central and South America—reporting on all the best surfing locations, chronicling the stories of local surfers and restaurant owners, and compiling recipes representative of each area. The narrative begins in Cuba with beautiful images of the city and the beaches, as well as stories related to the Cuban surfing community and a discussion of popular Cuban dishes. Next is a tour of Mexico—first with street tacos, a trip through Mexican markets, and day spent in the urban graffitiscene of Guadalajara; then with Tostadas de Pulpo (Octopus Crackers), Shrimp and Portobello Burgers, and glimpse into small town life in the remote surfing town of San Pancho. The Mexican leg of the journey draws to a conclusion with 7-meter-waves, BBQ, and Tajine in Rio Nexpa, as well as “a perfect righthander barreling of a point” in the scenic La Ticla. After Mexico comes a long list of sites and sounds as the two men make their way through Nicaragua, Costa Rica, Panama, Ecuador, Peru, and finally Chile, exploring the beaches and waves, as well as the kitchens of each location.

Interspersed throughout the pages of the trip are more than 90 regional recipes, over 250 stunning photographs, and a wide array of tips and stories ranging from social commentary on the Cuban surf scene to pointers on how to rent a “Hamaquera” in La Ticla for $3 a night.

Johannes Riffelmacher
Johannes was born on June 11, 1986 in Eichstätt, Bavaria. There he attended high school at the Gabrieli-Gymnasium and graduated in 2005. He first discovered a passion for cooking as a young child in his parents kitchen, where he learned the basics of various culinary cultures from two adept amateur chefs.
Besides cooking, his second greatest passion is surfing. Since his early youth he has spent every available week traveling to various surf spots around the world. After graduating from high school, he studied at the Akademie U5 school of graphic and communication design in Munich and completed his degree in the summer of 2008. He then set off on a world tour equipped with surfboard, backpack, and cooking knives. After seven inspirational months in Canada, the U.S., New Zealand, Australia, Indonesia, and Hong Kong, he returned to Germany in March 2009. In June 2009 he began an internship in graphic design at the renowned Matt/Alster advertising agency, where he eventually reached the level of Senior Art Director. While at Jung von Matt, he received numerous national and international creativity awards and developed ad campaigns for brands such as Mercedes Benz, MTV, and Ricola. After four and a half years, he left Jung von Matt to work on the travel, cooking, and surfing project "Salt & Silver" together with photographer-cameraman Thomas Kosikowski.

Thomas Kosikowski
Thomas Kosikowski was born in 1988. He’s been interested in photography since childhood, thanks in part to his father’s influence, and has been working as a freelance photographer ever since he finished school. His main influences have come from skateboarding, rap, and graffiti, all of which have shaped his style.
Thomas gradually became interested in moving images, which led him to study cinematography in Hamburg. As an intern at the Mamma Team promotional film production house in Barcelona, he acquired the discipline and conscientiousness necessary for succeeding in the business – and it was also one of the best times in his life. His love of cooking also originated in his youth and has been developing ever since. For many years, Thomas and Johannes have been cooking together for friends, family, friends of friends, and anyone else who wants a taste. Their desire to work together on a project that included both cooking and travel and that drew on the specific talents of both friends finally led to the “Salt & Silver” project, which for Thomas is dream come true.

"A word of caution: There is a 99.999% chance you will probably want to book your own ticket to Latin America STAT." (Annie Daly, Buzzfeed)

"Even for a lifelong Southern California native, I just learned a plethora of dishes that were previously non existent to me." (GEARMINDED)

"Find us a surfer that doesn't like to eat. Impossible." (Surfer Today)

"The recipes in Salt & Silver are real-deal, the photography is breathtaking, and the tales of full immersion are inspiring." (Nick McGregor, Eastern Surf Magazine)