Hard Magic: Book I of the Grimnoir Chronicles (Hardcover) 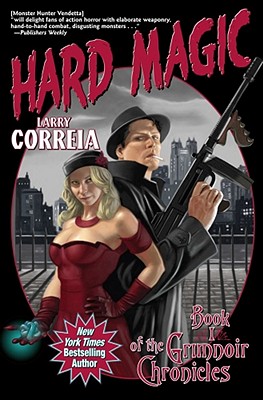 This is book number 1 in the Grimnoir Chronicles (Hardcover) series.

A New Novel of Alternate History/Fantasy Adventure by the Author of the New York Times Best Seller, Monster Hunter Vendetta.

A Hard-Boiled Private Eye Caught Between Opposing Forces in a Secret War Waged by Magic.

Jake Sullivan is a licensed Private Eye—with a seriously hardboiled attitude. He also possesses raw magical talent and the ability to make objects in his vicinity light as a feather or as heavy as depleted uranium, all with a magical thought. It's no wonder the G-men turn to Jake when they need someone to go after a suspected killer who’s been knocking off banks in a magic-enhanced crime spree. Problems arise when Jake discovers the bad girl behind the robberies is an old friend, and he happens to know her magic is just as powerful as his, and the Feds have  plunged Jake into a secret battle between powerful cartels of magic-users--a cartel whose ruthless leaders have decided that Jake is far too dangerous to live. . . .

“A gun person who likes science fiction—or, heck, anyone who likes science fiction—will enjoy Monster Hunter International and its new sequel, Monster Hunter Vendetta. . . . The plotting is excellent, and Correia makes you care about the characters . . . I read both books without putting them down except for work. . . . So, whaddaya waiting for? Go out and buy some . . . for yourselves, and for stocking stuffers.” —Massad Ayoob

“The idea of Larry Correia’s Monster Hunter International might remind you a bit of X-Files or Men in Black, but it’s neither. However, it is as good as or better than both. . . . Correia is going to be a writer to watch.” —GoodReads.com

“[A] no-holds-barred all-out page turner that is part science fiction, part horror, and an absolute blast to read.” —Bookreporter.com

Larry Correia is the Dragon Award-winning, best-selling author of the Monster Hunter International series, the Saga of the Forgotten Warrior series, the Grimnoir Chronicles, and the Dead Six series of military thrillers.