The Best of the Bolos: Their Finest Hour (Mass Market Paperbound) 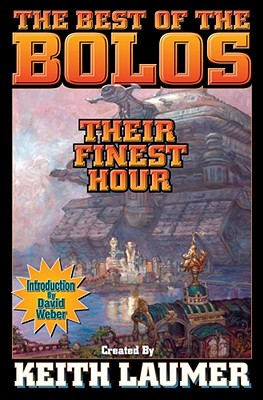 Science fiction giant Keith Laumer along with New York Times bestsellers David Weber, Mercedes Lackey, and S.M. Stirling recount the exploits of Laumer's dauntless, hard-fighting creations in this outstanding collection. It's the legendary saga of the Bolos--artificially intelligent tanks with courage and moral sense often better than that of their human masters. Controlled by tireless electronic brains, programmed to admit no possibility of defeat, the gigantic robot tanks known as Bolos are almost indestructible, and nearly unstoppable. Their artificial intelligences is designed to make them selfless servants and protector of humanity throughout the galaxy and to make each Bolo the moral epitome of a brave and upright knight of yore--and often far more noble than the humans who give them their orders. Created by Keith Laumer, the saga of the Bolos has now been extended by some of the best writers in science fiction, all of whom were profoundly inspired in their own work by Laumer's original Bolo tales. Now, the best stories of this legendary saga of creation and collaboration are collected in one volume, including work by New York Times best-selling writers David Weber, Mercedes Lackey and S. M. Stirling, military science fiction grand master David Drake, and Laumer himself, who recount the exploits of the dauntless Bolos in three classic novellas. About Bolo creator Keith Laumer:
"Laumer is a master ..." --Seattle Times. About the Bolo series:
..".manages to combine hardware and humanity...a collection to reread and enjoy."--Washington Times ." . .splendid...Laumer may rest easy. . .his creation is in good hands." --Publishers Weekly

A legendary creator of space opera and military science fiction adventures, Keith Laumer was a captain in the U.S. Air Force and later an officer in the U.S. diplomatic corps, serving throughout the world--all of which activity provides a solid background for his crackling adventure tales as well as his justly famous epic satirical comedies featuring Retief, the galaxy's canny, two-fisted diplomat. Laumer's best-loved creations, however, are the Bolos--gigantic tanks controlled by artificial intelligences, fighting to protect mankind against both alien and human enemies.