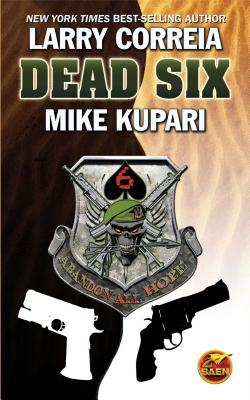 This is book number 1 in the Dead Six series.

From the author of the New York Times bestselling Monster Hunter series and an Air Force weapons expert, a nonstop action, edge-of-your-seat military-political thriller in a dangerous Middle Eastern setting complete with a compelling double-viewpoint twist to pull readers along to the very last page.

Michael Valentine, veteran and former member of an elite private military company, has been recruited by the government to conduct a secret counter-terror operation in the Persian Gulf nation of Zubara. The unit is called Dead Six. Their mission is to take the fight to the enemy and not get caught.  Lorenzo, assassin and thief extraordinaire, is being blackmailed by the world's most vicious crime lord. His team has to infiltrate the Zubaran terrorist network and pull off an impossible heist or his family will die. When Dead Six compromises his objective, Lorenzo has a new job: Find and kill Valentine. As allegiances are betrayed and the nation descends into a bloody civil war, Lorenzo and Valentine must face off.  Two men. Two missions. Only one will win.