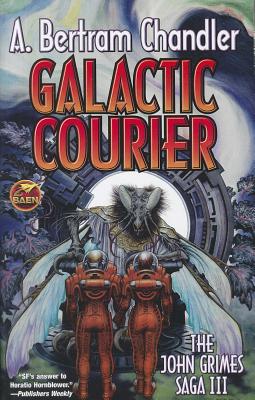 This is book number 3 in the John Grimes Saga series.

The #3 omni edition of the classic science fiction of A. Bertram Chandler's John Grimes books, with multiple interrelated stories and two full novels in this renowned SF saga. Pipe-smoking, action-loving spaceship commander John Grimes (think Captain Kirk with more of a navy, salty attitude) retires from heroic days in Earth's space navy to become a merchant captain extraordinaire and a force to reckon with on the galactic frontier and in a series of dangerous alternate realities. Number three in a three-volume collection of the legendary John Grimes of the Galactic Rim series. Classic Star Trek meets the high seas. If space travel is going to be anything like sailing the oceans, then A. Bertram Chandler has surely caught its absolute essence in his Grimes novels. Here are the crowning tales of Grimes' career - the Grimes "Rim Commodore" stories. In these tales, Grimes has found his true calling out on the edge of galactic civilization. He's the sheriff of a realm where pioneer colonies and parallel dimensions overlap, and a starship captain must be prepared for adventure in ALL possible worlds. Includes an astounding (as in, mostly published in Astounding and Analog by legendary editor John W. Campbell) cornucopia of Grimes novels bringing together all previous Commodore Grimes tales in Star Courier, To Keep the Ship, Matilda's Stepchildren, Star Loot. About A. Bertram Chandler and the John Grimes series:
"SF's answer to Horatio Hornblower." --Publishers Weekly "As Asimov chronicled the Foundation, as Heinlein built his Future History, so Chandler constructs the epic of the Rim Worlds." --Analog " Grimes] establishes a loyalty in his readers rather similar to that felt by readers of Hornblower. Indeed Chandler's] space operas are among the most likeable and well constructed in the genre. . . ." --The Encyclopedia of Science Fiction

A. Bertram Chandler was an Australian SF master who filled magazines such as Astounding with adventure and space opera extraordinaire during the 1960s and 1970s. He was a favorite of legendary editor John W. Campbell and was a merchantman seaman commanding various ships in the Australian and New Zealand navies during much of his early life--a background Chandler puts to full use in his John Grimes stories.