Back to the Moon (Mass Market) 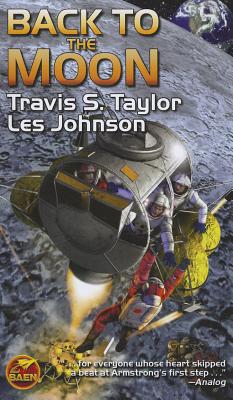 A crackling, realistic thriller of intrigue and courage overflowing with cool near-future ideas for a return to the glory days of lunar exploration from the “dream-team” of science fiction writer Travis S. Taylor (also a NASA and DOD consultant) and Les Johnson, Deputy Manager for the Advanced Concepts Office at the NASA—a man who definitely knows whereof he speaks.

The space race is back on.  While NASA stages a fiftieth anniversary return to the Moon, a gritty private company puts together its own moonshot, complete with space tourists in tow. Across the globe, the Chinese are determined to arrive first this time. What’s more, they’ll do whatever it takes to win—including stealing every bit of American technology they can pilfer and hack.  But just as politics and spectacle threaten to overshadow real accomplishment yet again, something goes horribly wrong on the lunar surface. Now the front-line troops, the astronauts themselves, must put aside the squabbles of others and take fate into their own hands. For it is time to prove that humans are not merely redundant cogs in a vast “lunar delivery process”–but that exploration and adventure in space is humanity’s destiny.

Les Johnson is a physicist and author. He is the author of The Spacetime War, Mission to Methone; Rescue Mode, coauthored with Ben Bova; Saving Proxima coauthored with Travis S. Taylor; and coeditor of the science/science fiction anthologies Going Interstellar and Stellaris: People of the Stars. He was technical consultant for the movies Europa Report and Lost in Space and has appeared in numerous documentaries on the Discovery and Science channels. Les was also the featured “Interstellar Explorer” in National Geographic Magazine and interviewed for Science Friday. By day, he serves as solar sail principal investigator of NASA’s first interplanetary solar sail missions and leads research on various other advanced space propulsion technologies at the George C. Marshall Space Flight Center in Huntsville, Alabama.