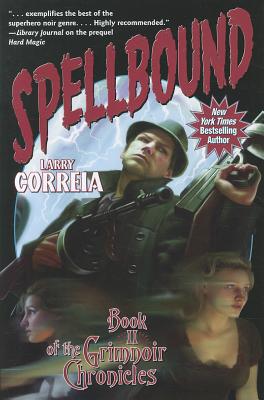 From the New York Times best-selling creator of Monster Hunter International #2 in the hard-hitting Grimnoir Chronicles. Jake Sullivan is a hardboiled private eye at war with evil magical powers in a dark and gritty urban fantasy that's a cross between the The Maltese Falcon and Angels and Demons and Twilight. Dark fantasy goes hardboiled in #2 of the hard-hitting Grimnoir Chronicles by the New York Times best-selling creator of Monster Hunter International. The Grimnoir Society's mission is to protect people with magic, and they've done so--successfully and in secret--since the mysterious arrival of the Power in the 1850s, but when a magical assassin makes an attempt on the life of President Franklin Roosevelt, the crime is pinned on the Grimnoir. The knights must become fugitives while they attempt to discover who framed them. Thing go from bad to worse when Jake Sullivan, former p.i. and knight of the Grimnoir, receives a telephone call from a dead man--a man he helped kill.. Turns out the Power jumped universes because it was fleeing from a predator that eats magic and leaves destroyed worlds in its wake. That predator has just landed on Earth.

About Larry Correia's Monster Hunter series
" A] no-holds-barred all-out page turner that is part science fiction, part horror, and an absolute blast to read."--Bookreporter.com "If you love monsters and action, you'll love this book. If you love guns, you'll love this book. If you love fantasy, and especially horror fantasy, you'll love this book."--Knotclan.com "A gun person who likes science fiction--or, heck, anyone who likes science fiction--will enjoy these books]...The plotting is excellent, and Correia makes you care about the characters...I read both books without putting them down except for work...so whaddaya waitin' for? Go and buy some...for yourself and for stocking stuffers."--Mayad Ayoob About Larry Correia's Monster Hunter Vendetta:
"This lighthearted, testosterone-soaked sequel to 2009's Monster Hunter International will delight fans of action horror with elaborate weaponry, hand-to-hand combat, disgusting monsters, and an endless stream of blood and body parts."--Publishers Weekly

Larry Correia is an award-winning competitive shooter, a movie-prop-gun master and, yes, an accountant by day - but an urban noir adventure master by night. He is very bald and lives in Utah.