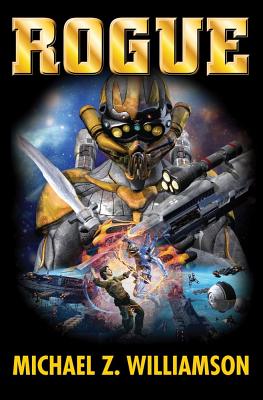 This is book number 6 in the Freehold series.

#6 in the Freehold Universe series. In a war-torn interplanetary future, a tactical forces specialist transformed into a sociopathic killing machine - and the only one who can stop him is his former commander. Kenneth Chinran commanded the elite unit assigned to take out an entire planet in a terrible war. Millions died; billions more perished in the aftermath. One doesn't send a sociopath on such a mission. A sociopath might not stop. Chinran did stop - but in the process nearly lost his sanity and his soul. But one of Chinran's men was a sociopath going in. Now he's a trained sociopath with the knowledge and firepower to take out entire tactical teams, evaporate through security cordons and change identity at will. Who do you send after a killer like that? There's only one answer: the man who trained him. The man who made him. About Michael Z. Williamson:
"A fast-paced, compulsive read...will appeal to fans of John Ringo, David Drake, Lois McMaster Bujold, and David Weber." - Kliatt "Williamson's military expertise is impressive." -SFReviews

Michael Z. Williamson is retired military, having served twenty-five years in the U.S. Army and the U.S. Air Force. He was deployed for Operation Iraqui Freedom and Operation Desert Fox. Williamson is a state-ranked competitive shooter in combat rifle and combat pistol. He has consulted on military matters, weapons and disaster preparedness for Discovery Channel and Outdoor Channel productions and is Editor-at-Large for Survivalblog, with 300K weekly readers. In addition, Williamson tests and reviews firearms and gear for manufacturers. Williamson's books set in his Freehold Universe include Freehold, Better to Beg Forgiveness, and Do Unto Others. His novel The Hero-written in collaboration with New York Times best-selling author John Ringo-has reached modern classic status. Williamson was born in England, raised in Liverpool and Toronto, Canada, and now resides in Indianapolis with his wife and two children.