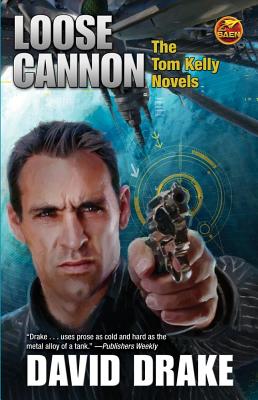 Skyripper
During the Cold War, a Soviet scientist has knowledge the Earth will be attacked by aliens, but only the U.S. has the laser-based technology to knock out the alien weaponry.  Enter Tom Kelly, American spy, navigator of the U.S. intelligence agency spaghetti, and ruthlessly effective operative when it comes to doing his job.  Kelly will get the information into the right hands to save most of humanity – but in the process, he’s prepared to annihilate anyone who gets in the way of his duty.

Fortress
Tom Kelly and his ruthless, adventurous ways return in an alternate past as JFK builds a space station to guard against alien attack.  Now nefarious forces with the Soviet Union as well as actual, evil aliens are trying to turn it against Earth, and the U.S.  THEY may have the high ground and the element of surprise on their hands, but WE have Tom Kelly.  For better or worse.  Or both.

The Army took David Drake from Duke Law School and sent him on a motorized tour of Viet Nam and Cambodia with the 11th Cav, the Blackhorse. He learned new skills, saw interesting sights, and met exotic people who hadn't run fast enough to get away. Dave returned to become Chapel Hill's Assistant Town Attorney and to try to put his life back together through fiction making sense of his Army experiences. Dave describes war from where he saw it: the loader's hatch of a tank in Cambodia. His military experience, combined with his formal education in history and Latin, has made him one of the foremost writers of realistic action SF and fantasy. His bestselling Hammer's Slammers series is credited with creating the genre of modern Military SF. He often wishes he had a less interesting background. Dave lives with his family in rural North Carolina.