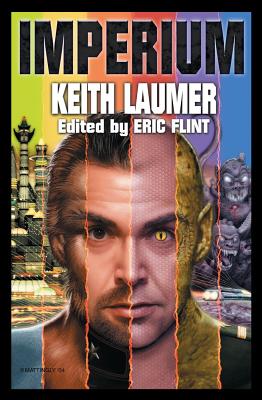 Science fiction giant Keith Laumer delivers a fast-paced, wry adventure of time travel and twisted realities in three classic interwoven tales as a regular Joe from our Earth fights against an alternate version of himself who has become a tyrant in an alternate timeline.

American Brion Bayard is abducted on the streets of Stockholm, and thrust into what he believes is a truck. He’s relieved to find his captors very apologetic, and very British—that is, until they began speaking about nations of which Bayard has never heard.

His captors were from Earth, yes. But not his Earth.

Turns out that there are countess parallel Earths, each different, where history has taken every possible turn—and there are even more uninhabitable worlds, destroyed by the misuse of cross-time travel.

Bayard discovers that the Earth he has now been thrust into, the Earth of the Imperium, is at war with a dangerously aggressive parallel Earth that has taken a wrong turn somewhere in time and whose ruler is...a parallel version of Bayard himself! Now Bayard’s mission is clear: to prevent his alternate self from destroying the new plane of reality that he now calls home, the Imperium.