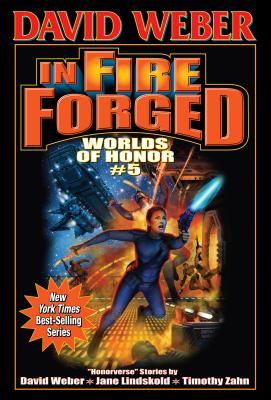 This is book number 5 in the Worlds of Honor (Weber) series.

The hottest military science fiction series of all time continues.  The mission: to boldly explore David Weber’s Honorverse; to deliver all the action, courage, derring-do, and pulse-pounding excitement of space naval adventure with tales set in a world touched by the greatness of one epic heroine:  Honor Harrington.  This fifth volume in the popular Worlds of Honor series includes stories by best-seller Jane Lindskold, New York Times bestseller and Star Wars novelization phenomenon, Timothy Zahn.  It’s rounded out with an all-new David-Weber-authored novella featuring a mob of space pirates who make the fatal mistake of taking on a young Manticorean Royal Navy commander who goes by the name Harrington.