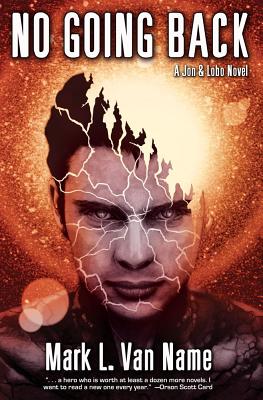 #5 in the popular Jon and Lobo military science fiction series. A nanotech-enhanced soldier-of-fortune joins with his A.I.-equipped intelligence and weapons platform (spaceship-sized ) on a mission to acquire forbidden tech that leads Jon to a confrontation with his own shadowy origins on a deadly planet. A substantial portion of Van Name's profits from the Jon and Lobo saga are dedicated to Falling Whistles, a fund for the rehabilitation of child soldiers. Jon and Lobo are back-and enemies on all sides are out to get them. Haunted by memories of children he could not save, Jon Moore becomes so increasingly self-destructive that even his best friend, the hyper-intelligent Predator-Class Assault Vehicle, Lobo, is worried. So when Jon receives both a job offer and a message from a woman from his distant past, he and Lobo leap at the welcome diversions. That the job is illegal is the least of their problems. They're happy to retrieve stolen artifacts from Jon's quarantined home world, and their fee is high even for a job so highly illegal. The forces protecting their targets are formidable, and the assault team that's chasing them is even more dangerous-but Jon and Lobo are used to that. The scientist Jon and Lobo need for the mission has an agenda of her own, but they've faced that problem before. This time, though, the knowledge that they and the others seek spells doom for Jon. Racing from planet to planet, Jon and Lobo come at last to a world so inhospitable that its statues and monuments outnumber its living inhabitants. Desperate and out of options, they encounter their deadliest challenges yet and must make life-changing decisions from which there truly is No Going Back
About Mark L. Van Name:
"Just when I was thinking science fiction might be over, Mark Van Name proves that there are still smart, exciting, emotional sci-fi stories to be told." -Orson Scott Card on Mark Van Name's One Jump Ahead

"He's going to be the guy to beat in the race to the top of SFdom." -John Ringo, best-selling creator of the "Posleen War" series About the Jon and Lobo series:
" P] owered by breakneck pacing and military-nuanced action and adventure. . .Van Name's focus on character development. . . makes for a much more cerebral-and enriching-read." -Publishers Weekly "...an undeniable page-turner...highly entertaining." -Publishers Weekly on Mark L. Van Name's Slanted Jack "Many twists and turns...outstanding action." -Midwest Book Review on Mark L. Van Name's One Jump Ahead

Mark L. Van Name, whom John Ringo has said is going to be the guy to beat in the race to the top of SFdom, has worked in the high-tech industry for over 30 years and today runs a technology assessment company in the Research Triangle area of North Carolina. A former Executive Vice President for Ziff Davis Media and a national technology columnist, he's published over a thousand computer-related articles and multiple science fiction stories in a variety of magazines and anthologies, including the Year's Best Science Fiction.