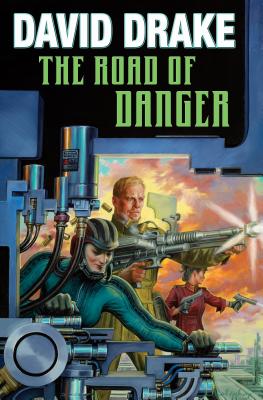 This is book number 9 in the RCN series.

Master and Commander in space Brilliant and brave starship captain Daniel Leary and ace spy Adele Mundy confront a pirate plot and once again save the Republic of Cinnabar despite itself. #9 in the national best selling RCN space adventure series. Captain Daniel Leary with his friend-and spy-Officer Adele Mundy are sent to a quiet sector to carry out an easy task: helping the local admiral put down a coup before it takes place. But then the jealous admiral gets rid of them by sending them off on a wild goose chase to a sector where commerce is king and business is carried out by extortion and gunfights. With anarchy and rebellion in the air, a rogue intelligence officer plots the war that will destroy civilization and enlists the help of a brute whom even torturers couldn't stomach. And, of course, it's up to Leary and Mundy to put a stop to the madness. About David Drake's previous RCN novel, What Distant Deeps:
"Drake deftly weaves a web of political machinations and intrigue that vividly depicts the costs of war. Fans of Patrick O'Brian's Maturin and Aubrey novels will enjoy this intricate, rousing space opera." -Publishers Weekly About David Drake's RCN series:
" R]ousing old-fashioned space opera." -Publishers Weekly "The fun is in the telling, and Mr. Drake has a strong voice. I want more " -Philadelphia Weekly Press " S]pace opera is alive and well. This series is getting better as the author goes along...character development combined with first-rate action and memorable world designs." -SFReader.com About David Drake:
" P]rose as cold and hard's the metal alloy of a tank...rivals Crane and Remarque..." -Chicago Sun-Times "Drake couldn't write a bad action scene at gunpoint." -Booklist

David Drake was attending Duke University Law School when he was drafted. He served the next two years in the Army, spending 1970 as an enlisted interrogator with the 11th armored Cavalry in Viet Nam and Cambodia. Upon return he completed his law degree at Duke and was for eight years Assistant Town Attorney for Chapel Hill, North Carolina. He has been a full-time freelance writer since 1981. His books include the genre-defining and bestselling Hammer's Slammers series, the RCN series including What Distant Deeps, In the Stormy Red Sky, The Way to Glory, and many more.