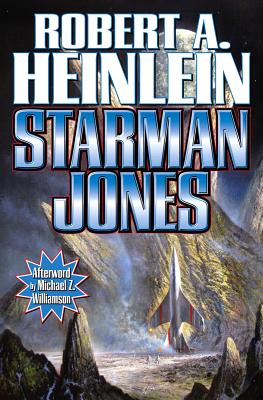 From the First Golden Age of SF master Robert A. Heinlein, this is the so-called juvenile (written, Heinlein always claims, just as much for adults) that started them all and made Heinlein a legend for multiple generations of readers—with a new introduction and afterword by popular military science fiction author Michael Z. Williamson. A poor young man seeks his fortune in space and comes of age a ship’s officer and hero.

The stars were closed to Max Jones. To get into space you either needed connections, a membership in the Guild, or a whole lot more money than Max, the son of a widowed, poor mother, was every going to have.  What Max does have going for him are his uncle’s prized astrogation manuals—book on star navigation that Max literally commits to memory word for word, equation for equation. When Max’s mother decides to remarry a bullying oaf, Max takes to the road, only to discover that his uncle Chet’s manuals, and Max’s near complete memorization of them, is a ticket to the stars. But serving on a spaceship is no easy task.  Duty is everything, and a mistake can mean you and all aboard are lost forever. Max loves every minute of his new life, and he steadily grows in the trust of his superior officers, and seems to be on course for a command track position. But then disaster strikes, and it’s going to take every trick Max ever learned from his tough life and his uncle’s manuals to save himself and the ship from a doom beyond extinction itself.

From the First Golden Age of Heinlein, this is the so-called juvenile (written, Heinlein always claims, just as much for adults) that started them all and made Heinlein a legend for multiple generations of readers.

About Robert A. Heinlein:
“Not only America's premier writer of speculative fiction, but the great writer of such fiction in the world.”—Stephen King