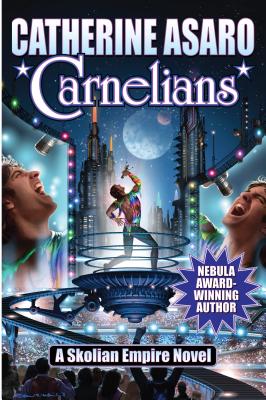 Two emperors navigate an uneasy peace, while a powerful trader guild does everything in its power to bring on war.  And as if Kelric, the Skolian Imperator, didn’t have enough problems, his own brother—who happens to be a rock star of galactic proportions—has a hit song that calls the traders out as the hidebound blueblood jerks they are, and pleads for an end to centuries of war.  Kelric and his Eubian Trader Empire counterpart Jabriol attempt finally to meet in a public summit and sign a treaty that will save billions of lives and end the grinding, millennium-long war.  But assassins lurk everywhere, and intrigue is afoot as the baroque old order has no intention of giving up its war-bought privilege and power without a fight to the death—and they don’t care if they take the rest of galactic civilization down with them.


About Carnelians:
“[T]he ending satisfied. . . a solid and worthwhile entry into the saga. . .it can be read as a standalone novel. . ..” –SF Crowsnest

Two-time Nebula-award winner Catherine Asaro has an M.A. in physics and a Ph.D. in chemical physics from Harvard. A former ballet and jazz dancer, she founded the Mainly Jazz Dance program at Harvard and now teaches at the Caryl Maxwell Classical Ballet.  She has recently taken up singing, doing several gigs with contemporary and jazz styles. She’s the creator of the popular Skolian Saga science fiction series with The Ruby Dice, Diamond Star and Carnelians as the latest entries.  Her other books include near-future technothrillers Alpha and Sunrise Alley. Asaro lives in with her husband and daughter.