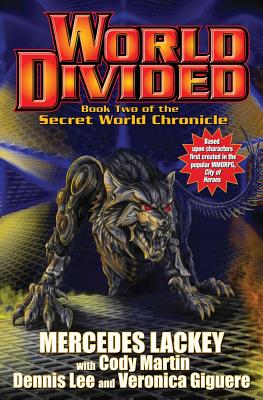 This is book number 2 in the Secret World Chronicles series.

From New York Times best-seller and science fiction and fantasy mistress of adventure Mercedes Lackey, #2 in a new pulse-pounding saga of modern-day humans with superpowers. After turning back an invasion of super-science power Nazi war machines, the heroes go on the hunt for the Nazi masters and take the battle to the bad guys.

After an Earth-scarring apocalyptic battle, humanity’s meta-heroes must take the fight to the enemy. Their task: hunt down the secret puppetmasters behind the Nazi robot invasion, the Thule Society, and cut off the multi-universe plague the Thulians have unleashed. It’s go time once again for the meta-heroes including fire-bender John Murdock, hacker-witch Vikki Nagy, healer Belladona Blue, super-quick Mercurye–and most of all for their ghostly ally, Seraphym, the spirit of the world who uses her secret influence to direct the fight against a Thulian-based tyranny of evil that is fast descending upon the entire universe!

From New York Times best-seller and science fiction and fantasy mistress of adventure Mercedes Lackey together with a team of topnotch collaborators, the second entry in the blockbuster saga of superpowers–and the very human men and women who must learn to wield them.

Mercedes Lackey is the New York Times best-selling author of the Bardic Voices series and the Serrated Edge series (both Baen), the Heralds of Valdemar series, and many more. Among her popular Baen titles are The Fire Rose, The Lark and the Wren, and The Shadow of the Lion (with Eric Flint and Dave Freer). She lives in Oklahoma.