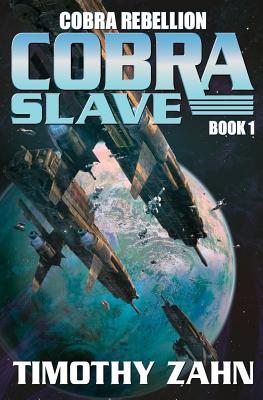 ORIGINAL TRADE PAPERBACK New York Times #1 best-selling author Timothy Zahn continues his Cobra SF adventure series with the latest entry in a new Cobra saga, Cobra Rebellion. Cobra warriors: technologically enhanced and implanted with an arsenal of covert weaponry fight against alien foes and evil humans. Book One of the Cobra Rebellion Saga, and a new entry in New York Times #1 best seller Timothy Zahn's legendary Cobra series. Cobras: technologically-enhanced warriors bred to fight an alien menace no ordinary human can withstand. At the center of action on Cobra world Aventine: the legendary Moreau clan. In times of war, the Cobras are necessary, yet in times of peace they are often reviled by those they have saved. Now the Cobras have resisted a second invasion of the alien Troft forces, and forced the Troft to a stalemate -- and even converted some thoughtful Troft into uneasy allies against their kin. Yet all is not well in the human sector of the galaxy. A supposed sister empire, the Dominion of Man, threatens the Cobra worlds with what is, in effect, enslavement, as it moves to consolidate power over all the Cobra worlds. The plan on Aventine: to extort from the Moreau family the location of the home planet of a mysterious human ally that may be more powerful than the Dominion: the Qasaman empire. Meanwhile, Cobra Merrick Moreau is on a secret mission of his own to a world of humans enslaved by Troft masters. It is a world of barbaric cruelty where every human is slave chattel to Troft gamblers. There the Troft force whole villages, even children, into life and death struggles served up for Troft entertainment. But the totalitarian Dominion of Man and the Troft game-masters are in for a rude surprise: Cobras are not merely technological marvels. They are far more. For within each Cobra, bred by close family ties and hard testing in battle, there beats the heart of a warrior and the burning conviction that a Cobra will be slave to no one. Rebellion is at hand, and once again, Cobras lead the fight for freedom. About Timothy Zahn:
"Zahn keeps the story moving at a breakneck pace, maintaining excitement."--Publishers Weekly

Y]ou can count on Timothy Zahn for three things: clean, sparse prose; good pacing; and great action scenes. The first book in the Cobra War series hits all those marks in admirable style and makes for a quick, entertaining sci-fi novel. --Blogcritics " Conqueror's Heritage] is another finely wrought space adventure . . . with] social, political and emotional complications, all of which Zahn treats with his usual skill."--Booklist "Zahn paints every detail in Angelmass] with gleamy realism . . . scientific dialogue that streams with starship hardware and military trooper talk . . . immensely appealing."--Kirkus Review