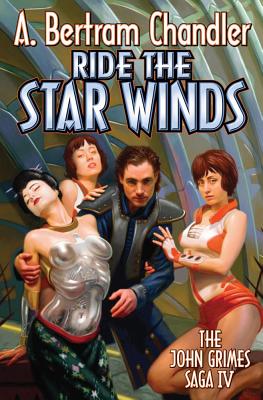 This is book number 4 in the John Grimes Saga series.

The fourth omnibus edition of the classic science fiction of A. Bertram Chandler's John Grimes books, with four full length novels and six interconnected short stories in this renowned SF saga. The Anarch Lords, The Last Amazon, The Wild Ones and Catch the Star Winds. Pipe-smoking, action-loving spaceship commander Lieutenant John Grimes (think Captain Kirk with more of a navy, salty attitude) moves out of the Federation navy and finds his true calling adventuring along the spaceways of the galactic rim. Number four in the collected adventures of the legendary John Grimes of the Galactic Rim series, including four novels: * The Anarch Lords John Grimes' short career as a somewhat benevolent space pirate is over, but he has sunk even lower, becoming a politician. He's now the governor of a planet of anarchists, where term limits are unnecessary, what with all the assassinations taking place. * The Last Amazon Back on Sparta, the formerly all-male planet, Grimes is waiting for his own ship to arrive when he's caught up in yet another revolution--and you can't tell the good guys (or gals) without a program. * The Wild Ones Back on Earth was the last place that Grimes expected to be. Another thing he hadn't expected was accusations of witchcraft being taken seriously. * Catch the Star Winds An experimental sailing ship of space was intended to exceed the speed of light. Then strange things happened involving time itself, and the crew wasn't sure they would ever see home, or their home time, again. Plus six interrelated short stories starring the indefatigable John Grimes, rounding out a large volume of space adventure with a dash of humor, and a likable hero who always gamely manages to muddle through. About A. Bertram Chandler and the John Grimes series:
"SF's answer to Horatio Hornblower." --Publishers Weekly "As Asimov chronicled the Foundation, as Heinlein built his Future History, so Chandler constructs the epic of the Rim Worlds." --Analog " Grimes] establishes a loyalty in his readers rather similar to that felt by readers of Hornblower. Indeed Chandler's] space operas are among the most likeable and well constructed in the genre. . . ." --The Encyclopedia of Science Fiction

A. Bertram Chandler was an Australian SF master who filled magazines such as Astounding with adventure and space opera extraordinaire from the 1940s into the 1970s. He was a favorite of legendary editor John W. Campbell and was a merchantman seaman commanding various ships in the Australian and New Zealand navies during much of his early life--a background Chandler puts to full use in his John Grimes stories.