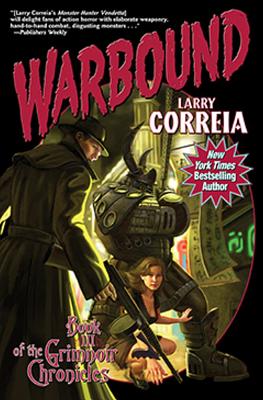 This is book number 3 in the Grimnoir Chronicles (Hardcover) series.

Only a handful of people in the world know that mankind’s magic comes from a living creature, and it is a refugee from another universe. The Power showed up here in the 1850s because it was running from something. Now it is 1933, and the Power’s hiding place has been discovered by a killer.

It is a predator that eats magic and leaves destroyed worlds in its wake. Earth is next.

Former private eye, Jake Sullivan, knows the score. The problem is hardly anyone believes him. The world’s most capable Active, Faye Vierra, could back him up, but she is hiding from the forces that think she is too dangerous to let live. So Jake has put together a ragtag crew of airship pirates and Grimnoir knights, and set out on a suicide mission to stop the predator before it is too late.


About the Urban Fantasy of Larry Correia:
“[A] no-holds-barred all-out page turner that is part science fiction, part horror, and an absolute blast to read.”—Bookreporter.com

Larry Correia is the creator of the Wall Street Journal and New York Times best-selling Monster Hunter series, with first entry Monster Hunter International, as well as urban fantasy hardboiled adventure saga the Grimnoir Chronicles, with first entry Hard Magic, and epic fantasy series The Saga of the Forgotten Warrior, with first entry Son of the Black Sword and latest entry, House of Assassins. He is an avid gun user and advocate and shot on a competitive level for many years. Before becoming a full-time writer, he was a military contract accountant, and a small business accountant and manager. Correia lives in Utah with his wife and family.