Pirates of the Timestream (Paperback) 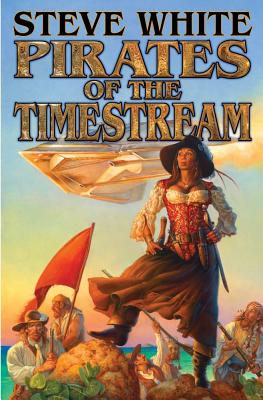 ORIGINAL TRADE PAPERBACK. Sequel to Sunset of the Gods and Blood of Heroes. Don Maitz cover (Captain Morgan's Rum artist). Pirates of the Caribbean meets times traveling heroes and godlike aliens. Sequel to Sunset of the Gods and Blood of Heroes. Special operations officer Jason Thanou of the Temporal Regulatory Authority must once again plunge into Old Earth's blood-drenched past to combat the plots of the Transhumanist underground to subvert that past and create a secret history leading up to the fulfillment of their mad dream of transforming humanity into a race of gods and monsters. Jason and his companions travel to the seventeenth century to encounter the real pirates of the Caribbean--including a beautiful she-pirate who turns out to be Transhumanist renegade. To Jason's horror, he also learns that the Teloi aliens who were the grim reality behind the pagan pantheons of antiquity--aliens Jason believed he'd successfully destroyed--are still active, and aiding the Transhumanists in founding an unspeakable cult. What's more, these are a different--and far more dangerous--breed of Teloi than before. Jason must somehow thwart the plans of the sinister allies while at the same time preventing reality itself from falling into chaos. In the end he finds himself venturing into space with a totally unexpected ally: Henry Morgan. About Pirates of the Timestreams
"White expertly blends historical and futuristic elements ... to create a fast-paced, detail-rich tale, seamlessly inserting his own inventions into factual events ... an exciting, engaging story, accessible to new readers and thoroughly satisfying for established fans."--Publishers Weekly About Steve White:
"White offers fast action and historically informed world-building."--Publishers Weekly

About Steve White's Forge of the Titans
." . . recalls the best of the John Campbell era of SF. White's core audience of hard SF fans will be pleased ..."--Publishers Weekly ." . . Engaging entertainment . . . much suspense and many well-handled action scenes . . ."--Booklist About Steve White's St. Anthony's Fire
"Give this one high marks for entertainment."--Booklist

Steve White completed a tour of duty in Vietnam as a naval officer. With David Weber, he has collaborated on Insurrection, Crusade, In Death Ground, and the New York Times best seller The Shiva Option. His most recent books for Baen are time travel adventure tale Sunset of the Gods and epic fantasy Demon's Gate.