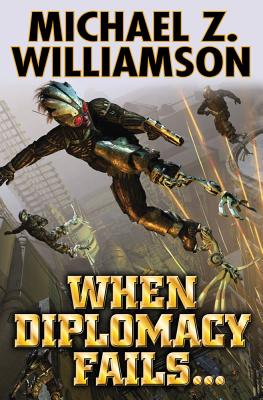 #7 in the Freehold Universe series. Science fiction high adventure with a compulsive thriller edge. High tech near-future mercenaries Ripple Creek Security must protect an obnoxious world government minister from the tons of enemies who want her dead—and killed in the worse possible way.

Alex Marlow and Ripple Creek Security's best personal security detail return to action. This time, they really don't like their principal, World Bureau Minister Joy Herman Highland–a highly-placed bureaucrat with aspirations to elected office. Even worse, Highland’s assistant wants to publicize every movement and action for his boss’s pending campaign, which is anathema to good security.

With a person of this status, it's not a case of someone wanting her dead. The only question is how many people want her dead, and what are they bringing to the fight?

The enemies are from without, within and all over. They have resources, funding and political cover. Ripple Creek needs to be cautious.

But the enemy also needs to worry. They’re going to be getting in each others' way in the process of carrying out their plans. And Ripple Creek has no qualms about explosions on galactic news. In fact, they enjoy it.

Michael Z. Williamson is retired from the US military, having served twenty-five years in the U.S. Army and the U.S. Air Force. He was deployed for Operation Iraqi Freedom and Operation Desert Fox. Williamson is a state-ranked competitive shooter in combat rifle and combat pistol. He has consulted on military matters, weapons and disaster preparedness for Discovery Channel and Outdoor Channel productions and is Editor-at-Large for Survivalblog, with 300,000 weekly readers. In addition, Williamson tests and reviews firearms and gear for manufacturers. Williamson’s books set in his Freehold Universe include Freehold, Better to Beg Forgiveness, and Do Unto Others. He is also the author of The Hero–written in collaboration with New York Times best-selling author John Ringo. Williamson was born in England, raised in Liverpool and Toronto, Canada, and now resides in Indianapolis with his wife and two children.