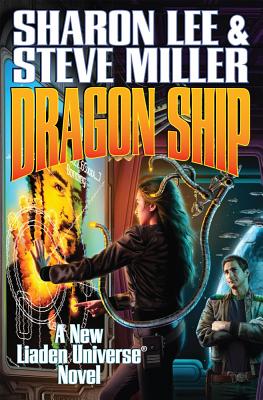 Latest entry in a best-selling space opera series with a huge and active base of fans.

Book 5 in the award-winning Liaden Universe® saga.  Stirring space adventure from master storytellers Sharon Lee and Steve Miller. Space ships, action, adventure – all tied together with a strong dollop of romance and intrigue – make this a compelling series for a wide range of readers, from romance to military SF lovers.

First Class courier pilot Theo Waitley was already known as a nexus of violence – and then she inherited the precarious captaincy of a mysterious self-aware ship designed to serve a long dead trader. Now she has a trade route to run for Clan Korval while she convinces the near mythic ghost ship Bechimo – and herself – that she wants to commit herself as the human side to their immensely powerful symbiosis. While her former lover battles a nano-virus that's eating him alive, she's challenged to rescue hundreds of stranded pilots and crewmen from an explosive situation in near orbit around a suddenly hostile planet. Lovers, enemies, an ex-roomie, and a jealous spaceship are all in peril as Theo wields power that no one in the universe is sure of, especially her.


About the Liaden Universe® series:
“Every now and then you come across an author, or in this case, a pair, who write exactly what you want to read, the characters and personalities that make you enjoy meeting them. . . . I rarely rave on and on about stories, but I am devoted to Lee and Miller novels and stories.” —Anne McCaffrey

“These authors consistently deliver stories with a rich, textured setting, intricate plotting, and vivid, interesting characters from fully-realized cultures, both human and alien, and each book gets better.”
–Elizabeth Moon

“[T]he many fans of the Liad universe will welcome the latest…continuing young pilot Theo Waitley’s
adventures.” – Booklist on Saltation