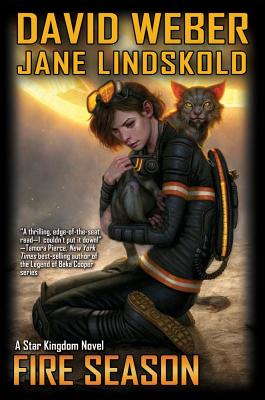 This is book number 2 in the Star Kingdom (Weber) series.

Fire in the forest–and a cry for help from a trapped and desperate alien mother! Unfortunately, this is one cry no human can hear. Stephanie Harrington, teenage Provisional Forest Ranger on the planet Sphinx, knows something is wrong from the uneasy emotion that is flooding into her from her treecat friend, Climbs Quickly. But though Stephanie’s alien comrade shares a tight bond with his two-legs, whom he knows as Death Fang’s Bane, he cannot communicate directly to her the anguished call from one of his people.

Still, their strong and direct bond of feeling may be enough. Stephanie and fellow ranger Karl Zivonik respond to Climbs Quickly’s rising waves of distress. Fire season on the pioneer world of Sphinx has begun. But there are those who want to use the natural cycle of the planet for personal gain –and to get rid of the one obstacle that stands in the way of acquiring even greater land and power on Spinx: the native treecats.

Now it’s up to Stephanie, Climbs Quickly along with their friends, family, and allies to prevent disaster and injustice from befalling a treecat clan. But in the process Stephanie must be certain to preserve the greatest secret all. It is the knowledge that the treecats of Sphinx are not merely pets or servants, but are highly intelligent in their own right–that they are a species fully deserving of rights, respect, and freedom. And keeping the secret that will allow the treecats time to develop a mutually beneficial relationship with humankind.

It all begins with the friendship of a girl and her treecat.

About David Weber and the Honor Harrington series:
“. . .Everything you could want in a heroine…plenty of action.”—Science Fiction Age

Jane Lindskold is the award-winning, New York Times best-selling author of more than twenty-five novels. Lindskold has also written in collaboration with David Weber and Roger Zelazny. When she’s not writing or reading, she’s likely being ordered around by a variety of small animals. Lindskold lives in New Mexico.