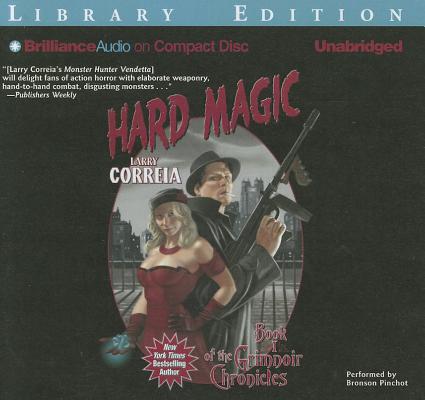 This is book number 1 in the Grimnoir Chronicles series.

Jake Sullivan is a war hero, a private eye--and an ex-con. He's free because he has a magical talent and the Feds need his help in apprehending criminals with their own magical abilities. But the last operation Jake was sent on went completely wrong, and Delilah Jones, an old friend in happier times, had too much magical muscle with her for the Feds to handle, even with Jake's help.

It got worse. Jake found out that not only have the Feds been lying to him, but there was a secret war being waged by opposing forces of magic-users. Worse still, he had attracted the attention of one side's ruthless leaders -- who were of the opinion that Jake was far too dangerous to be permitted to live....

"The plotting is excellent, and Correia makes you care about the characters.... So, whaddaya waiting for?" --Massad Ayoob

"...Monster Hunter International might remind you a bit of X-Files or Men in Black, but it's neither. However, it is as good as or better than both.... Correia is going to be a writer to watch." --GoodReads.com