Tiger by the Tail (Mass Market) 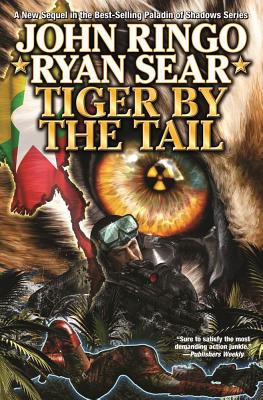 A new addition to the Kildar military adventure series created by John Ringo. Sequel to Ghost, Kildar, Choosers of the Slain and Unto the Breach.

After saving America from Middle Eastern terrorists, even Mike Harmon and the Keldara could use a vacation. Of course, the Kildar’s idea of a vacation includes taking down pirates in the Singapore Straits. But when he finds computer chips designed to run nuclear reactors in the pirate booty, Harmon has a new mission thrust upon him–discover how bottom-feeding thieves got their hands on top-secret technology.

The chips are headed for newly democratic Myanmar, a country vital to American interests in the region. Now Harmon finds himself in a desperate race to learn who stole the chips and why. From glittering Hong Kong to the slums of Thailand to the swamps of Myanmar, Harmon and his Keldara team follow a trail of death and deceit across the glittering underbelly of Southeast Asia.

And as the path winds through dark jungle and slave labor camps to the heart of newborn democracy, Harmon must devise a way to prevent the nasty overthrow of a nation’s capital by totalitarian tyrants. But if there’s one thing Mike and the Keldara specialize in, it’s doing what it takes to give freedom a chance.

“[Ringo’s SF is] peopled with three-dimensional characters and spiced with personal drama as well as tactical finesse.” —Library Journal

“The interstellar skullduggery is thick, and the final action sequence . . . is practically impossible not to read in one sitting. . .exceedingly impressive. . .executed with skill, verve, and wit.” —Booklist

“Ringo provides a textbook example of how a novel in the military SF subgenre should be written. . . . Crackerjack storytelling.” —Starlog