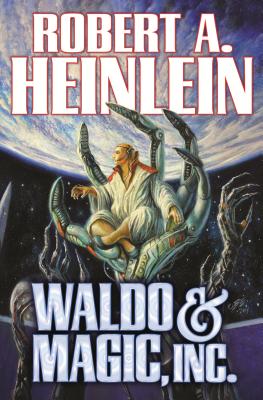 Waldo
North Power-Air is in trouble. Their aircraft are crashing at an alarming rate, and no one can figure out the cause.  Desperate for an answer, they turn to Waldo, a crippled genius who lives in a zero-g home in orbit around Earth. But Waldo has little reason to want to help the rest of humanity—until he learns that the solution to Earth’s problems also hold the key to his own.

Magic, Inc.
Under the guise of an agency for magicians, Magic, Inc. systematically squeezed out the small independent magicians. But one man stands firm.  And with the help of an Oxford-educated African shaman and a little old lady adept at black magic, he is willing to take on the demons of Hell to resolve the problem—once and for all!

About Robert A. Heinlein:
“Not only America's premier writer of speculative fiction, but the greatest writer of such fiction in the world.”—Stephen King.