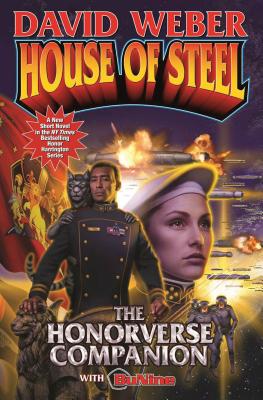 This is book number 20 in the Honor Harrington series.

The ultimate guide and companion to the New York Times best-selling Honor Harrington series.
Contains a new short Honorverse novel, plus a compendium of tech, specs, and history to accompany the legendary series.

An all-new David Weber Honorverse short novel, I Will Build a House of Steel, chronicling the early days of the Manticoran Star Kingdom when King Roger was a naval lieutenant.

Have you ever finished the latest Honor Harrington novel from David Weber and wished you could linger in Weber’s Honorverse just a bit longer? Now you can with this treasure trove of tech, specs, and insights on David Weber’s mega best-selling Honor Harrington series. Orbital characteristics of key planets, regimental order of the Royal Navy, backstory on the history and drama of the Star Kingdom’s birth and early days—you’ll find it all here, thoughtfully arranged by the Bureau 9 Weber research group, and overseen by David Weber himself.