The Rods and the Axe (Carrera #6) (Hardcover) 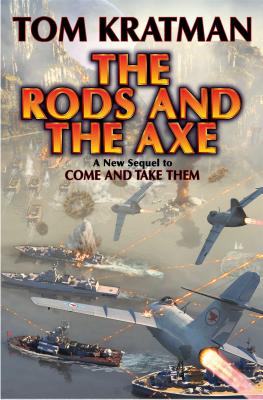 This is book number 6 in the Carrera series.

Tarawa. Iwo. Normandy.  Names that shine in the military history of two worlds, places where brave men stormed ashore and fought their way to victory no matter the odds.  But then there are other names: Marathon. Malta. Gallipoli.

Balboa’s Patricio Carrera has driven the Tauran Union from his adopted country, driven them out with appalling loss and worse humiliation. That’s not enough though.  To finally finish his enemies, Carrera needs to draw them back for a more telling defeat. He cannot take the battle to them because, beyond some long range bombardment capability, he cannot reach them. But when they return, they don’t plan to come alone; they insist on having someone else do most of the bleeding for them.

Carrera understands this. And that’s why he’s provoked the Zhong Guo mercilessly, infuriating their ruling Empress.  He needs the Zhong in the war, to buck up the Taurans to continue the war to its bitterest end.

But to get to Carrera, the Zhong must take the Isla Real, the strongest island fortress on two worlds. In the process, they’ll learn why Marines never forget those other names. . . .

Carrera’s enemies are about to learn why the expression "blood-stained water" is not just a literary allusion.

About Tom Kratman’s Carrera series:
“[I]nterplanetary warfare with. . .[a] visceral story of bravery and sacrifice . . . fans of the military SF of John Ringo and David Webershould enjoy this SF action adventure.”–Library Journal

Carerra Series:
A Desert Called Peace
Carnifex
The Lotus Eaters
The Amazon Legion
Come and Take Them
Rods and the Axe