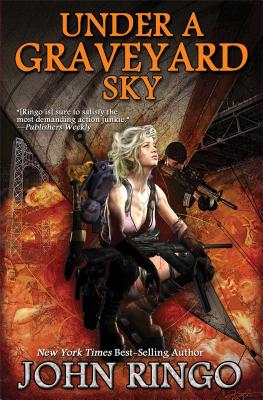 This is book number 1 in the Black Tide Rising series.

NEW SF/HORROR SERIES FROM NEW YORK TIMES BEST SELLING AUTHOR! A family of survivors who fight back against a zombie plague that has brought down civilization.

Zombies are real. And we made them. Are you prepared for the zombie apocalypse? The Smith family is—with the help of a few Marines.

When an airborne “zombie” plague is released, bringing civilization to a grinding halt, the Smith family—Steven, Stacey, Sophia and Faith—take to the Atlantic to avoid the chaos. The plan is to find a safe haven from the anarchy of infected humanity. What they discover, instead, is a sea composed of the tears of survivors and a passion for bringing hope.

For it is up to the Smiths and a small band of Marines to somehow create the refuge that survivors seek in a world of darkness and terror. Now with every continent a holocaust and every ship an abattoir, life is lived under a graveyard sky.

About Under a Graveyard Sky:
“. . .the thinking reader’s zombie novel. . .Ringo fleshes out his theme with convincing details … the proceedings become oddly plausible.”—Publishers Weekly

“. . . practically impossible not to read in one sitting . . . exceedingly impressive . . . executed with skill, verve, and wit.” —Booklist

BLACK TIDE RISING SERIES:
Under a Graveyard Sky
To Sail a Darkling Sea
Islands of Hope and Rage
Strands of Sorrow (forthcoming)