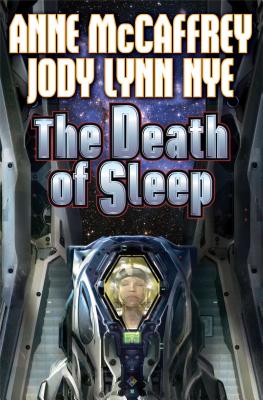 Like every other citizen of the Federation of Sentient Planets, Lunzie Mespil believed that no harm would come to her, but when the planet pirates attack the space liner on which she is a passenger, she might have to suffer more than just inconvenience.. . .

About Death of Sleep:
"McCaffrey has created a feisty, likable character in Lunzie Mespil."--Publishers Weekly

Anne Inez McCaffrey (1926–2011) was an American-born Irish writer, best known for the Dragonriders of Pern science fiction series. Early in McCaffrey’s forty-six-year career as a writer, she became the first woman to win a Hugo Award for fiction and the first to win a Nebula Award. Her 1978 novel The White Dragon became one of the first science fiction books to appear on the New York Times bestseller list. In 1999, she was the recipient of the Margaret A. Edwards Award, honoring her lifetime contribution to writing for teens. In 2005 the Science Fiction and Fantasy Writers of America named McCaffrey its twenty-second Grand Master, an annual award to living writers of fantasy and science fiction. She was inducted into the Science Fiction Hall of Fame in 2006.