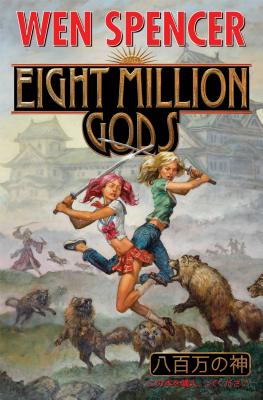 A new urban fantasy saga by the creator of the popular Tinker contemporary fantasy/SF series. A young American expat writer in Japan suffering from OCD tries to figure out if she's crazy or not while solving a murder that may be part of a war among Japanese deities.
A contemporary fantasy of mystery and death as American expats battle Japanese gods and monsters to retrieve an ancient artifact that can destroy the world. One Saturday afternoon, Nikki Delany thought, "George Wilson, in the kitchen, with a blender." By dinner, she had killed George and posted his gory murder to her blog. The next day, she put on her mourning clothes and went out to meet her best friend for lunch to discuss finding a replacement for her love interest. Nikki is a horror novelist. Her choice of career is dictated by an Obsessive Compulsive Disorder that forces her to write stories of death and destruction. She can't control it, doesn't understand it, but can use it to make money anywhere in the world. Currently "anywhere" is in Japan, hiding from her mother who sees Nikki's OCD as proof she's mentally unstable. Nikki's fragile peace starts to fall apart when the police arrest her for the murder of an American expatriate. Someone killed him with a blender. Reality starts to unravel around Nikki. She's attacked by a raccoon in a business suit. After a series of blackouts, she's accompanied by a boy that no one else can see, a boy who claims to be a god. Is she really being pursued by Japanese myths--or is she simply going insane? What Nikki does know for sure is that the bodies are piling up, her mother has arrived in Japan to lock her up for the rest of her life, she's written herself into her new book--and her novels always end with everyone dead. About Eight Million Gods
"Spencer is a good storyteller, with a knack for pulling interesting plot surprises out of left field. . . . A well-paced story with interesting characters and setting. . . ." -Asimov's "Eight Million Gods is a wonderfully weird romp through Japanese mythology, culture shock, fan culture and the ability to write your own happy ending. It is diverting and entertaining fantasy." --Galveston County Daily News "An American writer in Japan gets mixed with murder and magic in this engaging fantasy novel."--Locus About Wen Spencer:
"Wit and intelligence inform this off-beat, tongue-in-cheek fantasy.... Furious action ... good characterization, playful eroticism and well-developed folklore...lift this well above the fantasy average.... Buffy fans should find a lot to like in the book's resourceful heroine."--Publishers Weekly on series debut Tinker "Spencer's intertwining of current Earth technology and otherworldly elven magic is quite ingenious." -Booklist on the Elfhome series Comprehensive Teacher's Guide available.

John W. Campbell Award Winner Wen Spencer resides in paradise in Hilo, Hawaii with two volcanoes overlooking her home. Spencer says that she often wakes up and exclaims "Oh my god, I live on an island in the middle of the Pacific!" According to Spencer, she lives with "my Dali Llama-like husband, my autistic teenage son, and two cats (one of which is recovering from mental illness). All of which makes for very odd home life at times." Spencer's love of Japanese anime and manga flavors her writing. Her novel Tinker won the 2003 Sapphire Award for Best Science Fiction Romance and was a finalist for the Romantic Times Reviewers' Choice Award for Fantasy Novel. Her Wolf Who Rules was a Top Pick by Romantic Times and given their top rating of four and a half stars. Other Baen books include space opera thriller Endless Blue and Elfhome, third entry in the Tinker series.