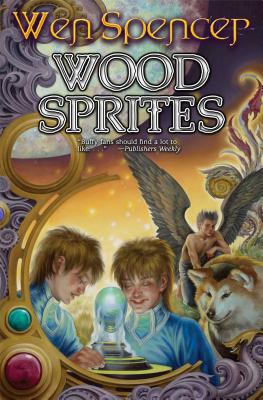 By Wen Spencer
Email or call for price.
Special Order

Book 4 in the Romantic Times Sapphire award winning Elfhome series. Even though they attend a school of gifted students in New York City, child geniuses Louise Mayer and her twin sister Jillian have always felt alone in the world, isolated by their brilliance. Shortly before their ninth birthday, they make an amazing discovery. They're not alone. Their real mother was astronaut Esme Shenske and their father was the famous inventor, Leonardo Dufae. They have an older sister, Alexander, living on the planet of Elfhome, and four siblings still in cryogenic storage at the fertility center. There's only one problem: the frozen embryos are scheduled to be destroyed within six months. The race is on to save their baby brother and sisters. As a war breaks out on Elfhome and riots start in New York City, the twins use science and magic to plow over everything standing in their way. But when they come face to face with an ancient evil force, they're soon in over their heads in danger. About Wood Sprites:
" M]aintains the series' solid quality. . . . The girls are endearing without being twee, and bright but not implausibly brilliant, and Spencer's prose remains engaging. The melange of science fiction and fantasy tropes, starships rubbing shoulders with proud elf warriors, is uncommon but tasty. Established fans will enjoy this installment, and those unfamiliar with the series or Spencer may find it an intriguing introduction to her work."--Publishers Weekly About Wen Spencer's Elfhome series:
"Spencer's intertwining of current Earth technology and otherworldly elven magic is quite ingenious." -Booklist

John W. Campbell Award Winner Wen Spencer resides in paradise in Hilo, Hawaii with two volcanoes overlooking her home. Spencer says that she often wakes up and exclaims "Oh my god, I live on an island in the middle of the Pacific!" According to Spencer, she lives with "my Dali Llama-like husband, my autistic teenage son, and two cats (one of which is recovering from mental illness). All of which makes for very odd home life at times." Spencer's love of Japanese anime and manga flavors her writing. Her novel Tinker won the 2003 Sapphire Award for Best Science Fiction Romance and was a finalist for the Romantic Times Reviewers' Choice Award for Fantasy Novel. Her Wolf Who Rules was a Top Pick by Romantic Times and given their top rating of four and a half stars. Other Baen books include space opera thriller Endless Blue and Elfhome, third entry in the Tinker series.