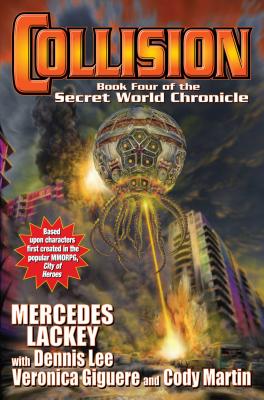 This is book number 4 in the Secret World Chronicle series.

From New York Times best-seller and science fiction and fantasy mistress of adventure Mercedes Lackey, Book #4 in the pulse-pounding SECRET WORLD saga of modern-day humans with superpowers. The metaheroes deal with the consequences of their superpowers, but the evil Thulian threat lies in wait.

Destroying the Thulian North American Headquarters has not made life easier for ECHO, or the world. The Thulians continue their attacks, first in unpredictable incursions, then with another all-out assault on ECHO, orchestrated against ECHO headquarters across the world.

Dominic Verdigris has not given up on his effort to obtain The Seraphym for himself, in order to use her to avert his own fate at the hands of the Thulians. Nor have the heroes of ECHO and the CCCP found life anything but harder.

Belladonna's duties have increased a thousand-fold, and now she has responsibility for the lives of every metahuman in ECHO on her conscience. Obviously using the intelligence gathered from the raid on the North American Thulian base to find the main Headquarters is of paramount importance--but once it is found, can she manage to convince the armies of the world to follow ECHO into an all-out attack?

Then Red Saviour risks everything on a risky gambit of her own: send her "wolves" of the CCCP to find the Thulian Headquarters, despite the dangers, and despite the consequences of blowing everything on this hazardous gambit that could very well end, not in victory, but with the world in flames.

About World Divided, Book 2 in the Secret World Chronicle:
"[C]omes together seamlessly. . .an awesome and lightning-paced story: read it on a day when you will not have to put it down."–San Francisco Book Review

Mercedes Lackey is the New York Times best-selling author of the Bardic Voices series and the Serrated Edge series (both Baen), the Heralds of Valdemar series, and many more. Among her popular Baen titles are The Fire Rose, The Lark and the Wren, and also The Shadow of the Lion and Burdens of the Dead with Eric Flint and Dave Freer. She lives in Oklahoma.