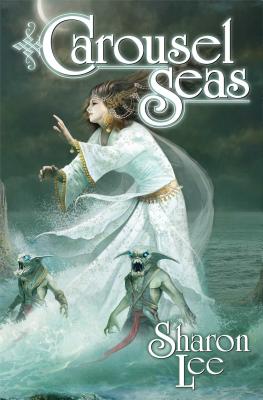 This is book number 3 in the Archers Beach series.

Welcome to Archers Beach in the Changing Land, the last and least of the Six Worlds, where magic works, sometimes, and the Guardian husbands the vitality of the land and everyone on it -- earth spirit and plain human alike.

Kate Archer, Guardian and carousel-keeper, has been busy making some changes of her own, notably beginning a romantic relationship with Borgan, the Guardian of the Gulf of Maine, Kate's opposite number, and, some would say, her natural mate.

Oh, and she's been instrumental in releasing the prisoners that had been bound into the carousel animals -- which she's inclined to think is a good thing. . .

Until a former sea goddess sets up housekeeping in the Gulf of Maine, challenging Borgan's authority; endangering Kate and everything she holds precious.

. . .because the goddess has fallen in love in Borgan; and she'll stop at nothing to possess him.

Archers Beach is about to suffer a sea-change -- and the question is whether Kate can survive it.

Nationally best-selling co-creator of the Liaden Universe® saga, Lee brings high energy action and romance to this tale of contemporary fantasy and redemption.

About Carousel Tides:
“[A] pyrotechnic finale that plays out magically behind the ordinary facade of smalltown Maine life, evoking much of the romance and magic of [Lee’s] popular Liaden series.” –Publishers Weekly

"[A] virtuoso ride, full of the spirit of the carnival, aware of the thinness of the veil between the worlds. . .a rollicking tale full of non-stop action. . .and yet there's also a quiet at its heart, because there really is this magic in everything and Sharon Lee knows how to spin it."–SFsite

On Sharon Lee & Steve Miller’s Liaden Universe® Space Opera Epic:
“Lee and Miller’s novels are full of action, exotic characters, plenty of plot, and even a touch of romance. The world building is outstanding.” –Booklist

Before settling down to the serene and stable life of a science fiction and fantasy writer, Steve was a traveling poet, rock-band reviewer, reporter, and editor of a string of community newspapers. Sharon, less adventurous, has been an advertising copywriter, copy editor on night-side news at a small city newspaper, reporter, photographer, and book reviewer. Both credit their newspaper experiences with teaching them the finer points of collaboration. Sharon and Steve passionately believe that reading fiction ought to be fun, and that stories are entertainment. They maintain a web presence at korval.com.