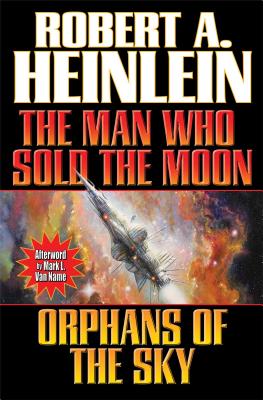 All-new afterword by popular Jon and Lobo series creator, Mark L. Van Name. Two classic Robert A. Heinlein books in one volume: The Man Who Sold the Moon and Orphans of the Sky. Journeys into space, one taking humans to space by hook or by crook, the other the classic first-time tale of a generation vessel with passengers who do not realize they are in a spaceship. Two classic Robert A. Heinlein books in one volume, with an all-new introduction by Mark L. Van Name, author of the Jon and Lobo military SF series. The Man Who Sold the Moon: D. D. Harriman is a billionaire with a dream: the dream of space for all mankind. The method? Anything that works. Maybe, in fact, Harriman goes too far. But he will give us the stars. Orphans of the Sky: Hugh had been taught that, according to the ancient sacred writings, the Ship was on a voyage to faraway Centaurus. But he also understood that this must be allegory for a voyage to spiritual perfection. After all, the real world was only metal corridors and nothing else, right? And then Hugh begins to suspect the truth. Two all-time classics from seven-time Hugo winner and Dean of Science Fiction, Robert A. Heinlein. About Robert A. Heinlein:
"Not only America's premier writer of speculative fiction, but the greatest writer of such fiction in the world." -Stephen King "One of the grand masters of science fiction." -Wall Street Journal Comprehensive Teacher's Guide available at Baen.com.

Robert A Heinlein is considered one of the Big Three of classic science fiction (along with Isaac Asimov and Arthur C. Clarke). Heinlein is a seven-time Hugo Award recipient and was given the first Grand Master Nebula Award for lifetime achievement. Heinlein's juveniles alone have influenced generations of scientists, engineers and creators the world over (for instance, it was once estimated that everyone in the Apollo 11 mission control room had read and loved at least one Heinlein novel). His worldwide bestsellers include Have Space Suit--Will Travel, Stranger in a Strange Land, Starship Troopers, Time Enough for Love, and The Moon Is a Harsh Mistress.