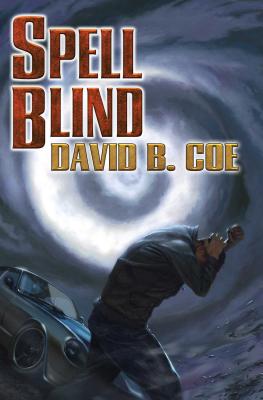 This is book number 1 in the Case Files of Justis Fearsson series.

Justis Fearsson is a private investigator on the trail of a serial killer in Phoenix, Arizona.  Justis is also a weremyste—a person with a wizard’s gifts and the ability to see into the paranormal world. Unfortunately, weremystes also tend to go crazy on the full moon—which is why Justis is no longer a cop.  Hard to explain those absences as anything but mental breakdown. But now an old case from his police detective days has come back to haunt him, literally, as a serial killer known as the Blind Angel strikes again. His signature stroke: burning out the victims’ eyes with magic.  Now the victims are piling up, including the daughter of a senator, and Justis must race to stop the Blind Angel before he, she, or it kills again. There’s only one clue he’s got to go on: the Blind Angel is using the most powerful magic Justis has ever encountered, and if he doesn’t watch his own magical step, he may end up just as dead as the other vics.

About Spell Blind:
"Coe brings deep knowledge of both fantasy and mystery to his well- structured first urban fantasy novel.. . . he tells an entertaining story with a good mystery at its core."—Publishers Weekly

About David B. Coe's Rules of Ascension:
"War and politics, love and magic, all drawn in detail against a vividly imagined feudal background. A complex and excellent book." —David Drake, author of Lord of the Isles

". . . epic . . . a world of rival nobles, sinister mages, and a few men and women of courage and conviction. Well-developed characters and an intriguing political background . . ."—Library Journal

David B. Coe is the author of many fantasy and contemporary fantasy novels and stories.  He was the winner of the William L. Crawford Award for best first fantasy series, awarded at the International Conference on the Fantastic for Children of Amarid and The Outlanders, the first two novels of the LonTobyn Chronicles. His series Winds of the Forelands, began with Rules of Ascension and continued with Seeds of Betrayal, Bonds of Vengeance, Shapers of Darkness, and Weavers of War. Coe is a founding members of the well-regarded writing blog, MagicalWords.net.  His contemporary fantasy series The Case Files of Justin Fearsson begins with Spell-Blind from Baen Books. Coe lives with his wife, Nancy Berner, and their two daughters in Sewanee, Tennessee.