Into the Maelstrom (Citizen #2) (Hardcover) 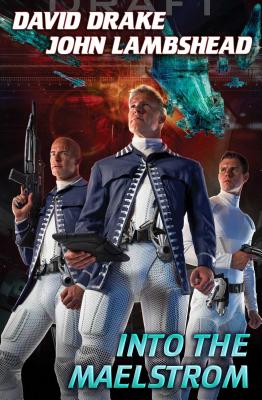 This is book number 2 in the Citizen series.

ENTRY #2 IN CITIZEN SERIES, SEQUEL TO INTO THE HINTERLANDS. Science fiction adventure on the frontier realms of empire written by biological scientist Dr. John Lambshead and nationally best-selling writer David Drake. THE RIGHT MAN FOR A VERY BAD JOB The Cutter Stream colonies were at peace. If everybody behaved reasonably, that peace could last a thousand years. Allen Allenson had known war; it had made him peaceful and reasonable. He was far too experienced to believe the same was true of all his fellow colonists, however, let alone the government of the distant homeworld across the Bight. War was coming, a war that the colonies had to win if they were ever to be more than prison camps and a dumping ground for incompetent noblemen. The experience that had caused Allenson to hate war made him the only man who could lead the colonial army. Allenson knew that he wasn't really a general, but he understood his fellow colonists better than any homeworld general could. He would free the Cutter Stream, or he would die trying. What Allen Allenson would not do, what he would never do, was quit. About Into the Maelstrom
" The authors] neatly adapt real history to a science fiction framework in the second novel of the Citizen trilogy . . . Drake and Lambshead are telling the story of George Washington as a space opera. . . . I]ngeniously structured retelling."--Publishers Weekly About Into the Hinterlands
"Drake and Lambshead combine politics, military expeditions, and deep-space exploration into an intriguing tale...Recommended for all SF collections."--Booklist About David Drake's RCN series: " R]ousing old-fashioned space opera."--Publishers Weekly on the "RCN" series. "The fun is in the telling, and Mr. Drake has a strong voice. I want more "--Philadelphia Weekly Press " S]pace opera is alive and well. This series is getting better as the author goes along...character development combined with first-rate action and memorable world designs."--SFReader.com About David Drake: " P]rose as cold and hard's the metal alloy of a tank...rivals Crane and Remarque..."--Chicago Sun-Times "Drake couldn't write a bad action scene at gunpoint."--Booklist

David Drake was attending Duke University Law School when he was drafted. He served the next two years in the Army, spending 1970 as an enlisted interrogator with the 11th armored Cavalry in Vietnam and Cambodia. Upon his return he completed his law degree at Duke and was for eight years Assistant Town Attorney for Chapel Hill, North Carolina. He has been a full-time freelance writer since 1981. His books include the genre-defining and bestselling Hammer's Slammers series, the nationally bestselling RCN series including In the Stormy Red Sky, The Road of Danger, The Sea without a Shore and, with John Lambshead, the Citizen series entries Into the Hinterlands and Into the Maelstrom. Dr. John Lambshead is a retired senior research scientist in marine biodiversity at the Natural History Museum, London. He is also the Visiting Chair at Southampton University, Oceanography, and Regent's Lecturer, University of California. He writes military history and designs computer and fantasy games. He is the author of swashbuckling fantasy Lucy's Blade, contemporary urban fantasy Wolf in Shadow, and coauthor, with nationally best-selling author David Drake, of science fiction adventures, Into the Hinterlands and Into the Maelstrom.