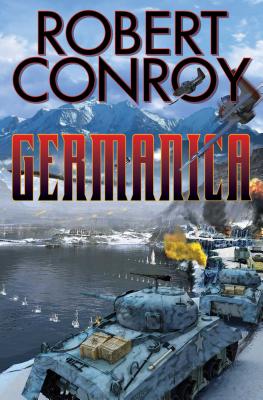 Best-selling alternate history master Robert Conroy returns to World War II, this time for a dangerous last stand of the Nazis in the heart of the Alps.

Deep in the heart of Europe's Alps in the redoubt called Germanica, Nazi propaganda master Josef Goebbels and a battalion of Nazi zealots hold out against a frantic final Allied push to end World War II. With Churchill losing his election, De Gaulle consolidating his rule over a newly liberated France, and Stalin asserting his own nefarious land-grab in Eastern Germany, only America, led by its untried new president Harry Truman, remains to face the toughest of Nazi warriors as they hunker down for a bitter fight to the last man.

Goebbels knows that if he can hold out just a bit longer, the war weary of the Western nations will back away from unconditional surrender for Germany, and he and his zealots can remain in power never to answer for their war crimes, and able to prepare for the moment when their hateful Nazi ideology is ready once again to rise from its alpine grave and strike at the heart of humanity!

But there are Americans and a few stalwart Europeans just as determined to put a final stake in the Nazi heart. It is now up to heroes in the making such as newly minted O.S.S. operative Ernie Janek, commando Captain Scott Tanner, and formerly enslaved Czech "Jew" Lena Bobek, to bring down the dark Nazi menace growing like a cancer in the mountainous heart of the continent.

About Germanica:
"[A] new and intriguing novel that takes the final days of the Third Reich as its jumping-off point. . . . Conroy captures the intricacies of WWII with an eye for historical nuance, and he crafts a believable alternate ending to the war. . . . [T]he story is buoyed by Conroy’s effective snapshot of the era."—Publishers Weekly

About Robert Conroy’s Himmler’s War:
“[Conroy] adds a personal touch to alternate history by describing events through the eyes of fictional characters serving on the front lines. VERDICT: Historical accuracy in the midst of creative speculation makes this piece of alternate history believable.”–Library Journal

Robert Conroy is the author of a run of hugely popular alternate history novels, including Himmler’s War, Rising Sun, 1920: America's Great War, Liberty: 1784, and 1864: Custer in Chains for Baen Books. His 1942, which is set within a Japanese conquest of Hawaii, won the prestigious Sidewise Award for alternate histories. Conroy has written for Military History magazine and has traveled extensively in Europe where he’s taken a special interest in battlefields, historical collections and castles. After a first career in business, Conroy has turned his lifelong passion for writing and military history into an immensely satisfying new occupation. He is married and lives in southeastern Michigan.