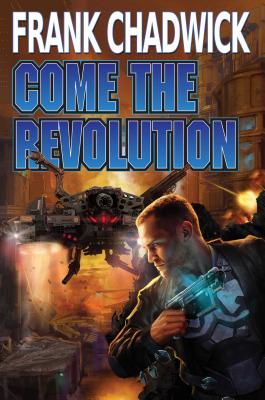 SEQUEL TO HOW DARK THE WORLD BECOMES. Tough-as-nails former gangster Sasha Naradnyo is back in this noir thrill ride from legendary game creator Frank Chadwick. Sasha Naradnyo had come a long way from the slums of Crack City on the planet Peezgtaan--from Human gangster to head of security for Tweezaa e-Traak, the Varoki heiress to the largest fortune in the history of the Stellar Commonwealth. Then the largest nation on the Varoki home world collapsed into riots and civil war, a murderously anti-human Varoki fanatic made his bid for power, and the head of the Secret Police decided to take a personal interest in Sasha. Now Sasha must navigate the violence and anarchy of a growing revolution, come to grips with ghosts from his past who have suddenly turned up alive, make common cause with resistance fighters who want him dead, expose a conspiracy which will shake the Commonwealth to its foundations . . . and do it all without losing his soul. About Come the Revolution:
" A]dventure, family secrets and humor. . . . The plot is as hard as the science Chadwick uses. . . . E]ngages readers. First-rate science fiction; it moves at a fast pace throughout."--Dailey News of Galveston County "Chadwick offers an exciting military SF story set on the Varoki home planet of Hazz'Akato in his follow up to How Dark the World Becomes...Chadwick, a leading designer of military and science-fiction board- and role-playing games, knows his way around a battlefield...eccentric cohorts are entertaining, and a few surprises guarantee that readers will be seeing more of this series."--Booklist "This sequel to How Dark the World Becomes is a fast-paced, action-packed sf adventure. Readers new to Chadwick's series will be able to start here without too much trouble; essential background information is given, and the author leaps straight into an original story set two years after the previous entry."--Library Journal About prequel How Dark the World Becomes:
"How Dark the World Becomes is a crackling debut novel that speaks of great things to come It's whip-smart, lightning-fast and character-driven--in short it has everything required to be totally satisfying. Highly recommended." --Jonathan Maberry, New York Times best-selling author of Assassin's Code ". . . a] far off, hard scrabble intergalactic underworld . . . fast-paced intergalactic adventure full of far-flung alien intrigue."--Astroguyz " . . . thrilling space adventure . . . I was reminded of Jack McDevitt's Alex Benedict novels and Mark L. Van Name's Jon & Lobo adventures."--SFCrowsnest

Frank Chadwick is the New York Times number one best-selling nonfiction author of over two hundred books, articles, and columns on military history and military affairs, as well as over one hundred military and science fiction board and role-playing games. His game Space: 1889 was the first Steampunk game and remains a cult favorite. His other game writing credits include legendary fantasy game En Garde!, groundbreaking SF role playing game Traveller: The New Era, and many others. Chadwick's SF novels include How Dark the World Becomes and steampunk thriller The Forever Engine, both from Baen Books.