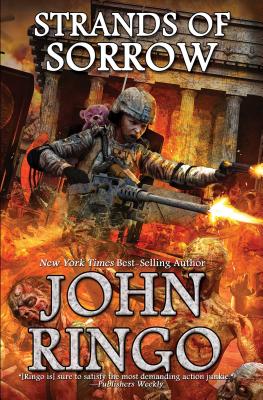 This is book number 4 in the Black Tide Rising series.

NATIONAL BEST SELLER IN HARDCOVER. Book 4 and conclusion of the Zombie Apocalypse Black Tide Rising series from New York Times best-selling author John Ringo.  Sequel to Islands of Rage and Hope, To Sail a Darkling Sea, and Under a Graveyard Sky. A hardened group of survivors fights back against a zombie plague that has brought down civilization.

With the world consumed by a devastating plague that drives humans violently insane, what was once a band of desperate survivors bobbing on a dark Atlantic ocean has now become Wolf Squadron, the only hope for the salvation of the human race. Banding together with what remains of the U.S. Navy, Wolf Squadron, and its leader Steve Smith, not only plans to survive—he plans to retake the mainland from the infected, starting with North America.

Smith's teenage daughters have become zombie hunters of unparalleled skill, both at land and on the sea, and they may hold the key to the rebirth of civilization on a devastated planet.

About the Black Tide Rising Series:
"Not only has Ringo found a mostly unexplored corner of the zombie landscape, he's using the zombie frame to tackle a broader theme: the collapse and rebirth of civilization. The zombie scenes are exciting, sure, but its the human story that keeps us involved. A fine series."—Booklist

BLACK TIDE RISING SERIES:
Under a Graveyard Sky
To Sail a Darkling Sea
Islands of Rage and Hope
Strands of Sorrow