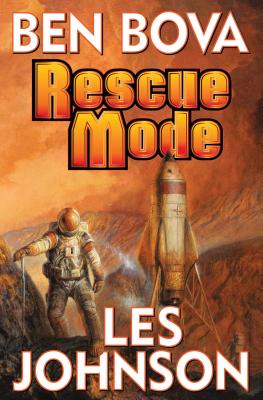 The first human mission to Mars meets with near-disaster when a meteoroid strikes the spacecraft, almost destroying it. The ship is too far from Earth to simply turn around and return home. The eight-person crew must ride their crippled ship to Mars while they desperately struggle to survive.

On Earth, powerful political forces that oppose human spaceflight try to use the accident as proof that sending humans into space is too dangerous to continue. The whole human space flight program hangs in the balance. And if the astronauts can’t nurse their ship to Mars and back, the voyagers will become either the first Martian colonists—or the first humans to perish on another planet.

About Rescue Mode:
"Space enthusiasts will appreciate the technical accuracy of Rescue Mode which reflects the engineering background of author Les Johnson, a rocket scientist. . . . Space enthusiasts . . . will want to add this one to their collection."—Ad Astra, National Space Society

"Bova and Johnson artfully introduce us to the major players in . . . the ambitious program for humankind’s first manned mission to Mars . . . and a tribute to Bova and Johnson’s story-telling skill . . . [which] shows plausible scientists at work in spite of daunting obstacles. . . . a story well-told."—LabLit

About Mars, Inc.:
"The Hugo winner returns to his most popular subject: the quest for Mars."—Publishers Weekly

About the award winning novels of Ben Bova:
“Technically accurate and absorbing . . .”—Kirkus