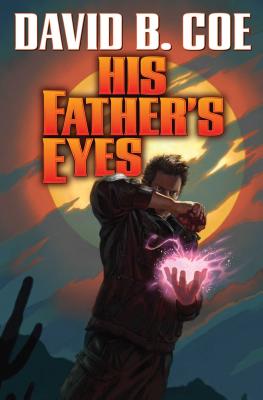 This is book number 2 in the Case Files of Justis Fearsson series.

David B. Coe is the author of many fantasy and contemporary fantasy novels and stories. He was the winner of the William L. Crawford Award for best first fantasy series, awarded at the International Conference on the Fantastic for Children of Amarid and The Outlanders, the first two novels of the LonTobyn Chronicles. His series Winds of the Forelands began with Rules of Ascension and continued with Seeds of Betrayal, Bonds of Vengeance, Shapers of Darkness, and Weavers of War. Coe is a founding member of the well-regarded writing blog, MagicalWords.net. His contemporary fantasy series The Case Files of Justin Fearsson begins with Spell Blind from Baen Books, and continues with this second volume, His Father's Eyes. Coe lives with his wife, Nancy Berner, and their two daughters in Sewanee, Tennessee.