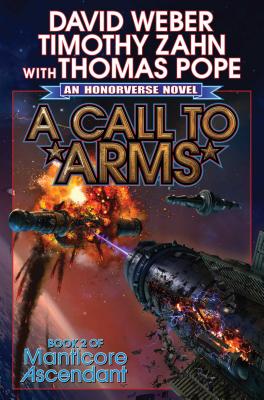 This is book number 2 in the Manticore Ascendant series.

Lieutenant Travis Long of the Royal Manticoran Navy is the sort of person who likes an orderly universe. One where people follow the rules.

Unfortunately, he lives in the real universe.

The good news is that Travis is one of those rare people who may like rules but has a talent for thinking outside them when everything starts coming apart. That talent has stood him—and the Star Kingdom—in good stead in the past, and it’s one reason he’s now a “mustang,” an ex-enlisted man who’s been given a commission as a King’s officer.

The bad news is that two of the best ways of making enemies ever invented are insisting on enforcing the rules . . . and thinking outside them when other people don’t. But the one rule Travis Long absolutely can’t break is the one that says an officer in the Royal Navy does his duty, whatever the consequences.

At the moment, there are powerful forces in the young Star Kingdom of Manticore’s Parliament which don’t think they need him. For that matter, they’re pretty sure they don’t need the Royal Manticoran Navy, either. After all, what does a sleepy little single-system star nation on the outer edge of the explored galaxy need with a navy?

Unhappily for them, the edge of the explored galaxy can be a far more dangerous place than they think it is. They’re about to find out why they need the Navy . . . and how very, very fortunate they are that Travis Long is in it.

About A Call to Arms:
“The plotting is as solid as ever, with smaller scenes building to an explosive, action-packed crescendo, and the authors strike a nice balance between technical details of space flight and the human cost of war."—Publishers Weekly

Praise for prequel A Call to Duty:
“This exciting book marks the first collaboration of two powerhouses . . . fans of both writers should be quite pleased with the result. Like Robert A. Heinlein and Orson Scott Card, Weber and Zahn are telling a story about a teenage character but writing for readers of all ages.”—Booklist

“A new series set in the universe of Weber's popular heroine Honor Harrington gets off to a solid start. . . . Cowriters Zahn and Weber do an excellent job alluding to events known to longtime fans. . . . [T]his astronautical adventure is filled with . . . intrigue and political drama.”—Publishers Weekly

About the Honor Harrington series:

“Weber combines realistic, engaging characters with intelligent technological projection and a deep understanding of military bureaucracy in this long-awaited Honor Harrington novel…Fans of this venerable space opera will rejoice to see Honor back in action.”—Publishers Weekly

“. . .everything you could want in a heroine …. Excellent … plenty of action.”—Science Fiction Age

“[Y]ou can count on Timothy Zahn for three things: clean, sparse prose; good pacing; and great action scenes. The first book in the Cobra War series hits all those marks in admirable style and makes for a quick, entertaining sci-fi novel.” —Blogcritics