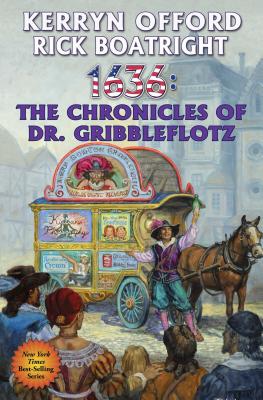 This is book number 20 in the Ring of Fire series.

A sparkling addition to the multiple New York Times best-selling Ring of Fire alternate history series created by Eric Flint. An alchemist of the 17th century confronts modern science with often amusing results. Phillip Theophrastus Gribbleflotz, the world's greatest alchemist and a great-grandson of Paracelsus--and a Bombast on his mother's side--was a man history had forgotten. But when the town of Grantville was transported by a cosmic accident from modern West Virginia to central Germany in the early seventeenth century, he got a second chance at fame and fortune. The world's greatest alchemist does not make household goods. But with suitable enticements Gribbleflotz is persuaded to make baking soda and then baking powder so that the time-displaced Americans can continue to enjoy such culinary classics as biscuits and gravy. Applying his superb grasp of the principles of alchemy to the muddled and confused notions the Americans have concerning what they call "chemistry," Gribbleflotz leaves obscurity behind. In his relentless search for a way to invigorate the quinta essential of the human humors, Gribbleflotz plays a central role in jump-starting the seventeenth century's new chemical and marital aids industries--and pioneering such critical fields of human knowledge as pyramidology and aura imaging. These are his chronicles. About Eric Flint's Ring of Fire series:
"This alternate history series is ... a landmark..."--Booklist " Eric] Flint's 1632 universe seems to be inspiring a whole new crop of gifted alternate historians."--Booklist "...reads like a technothriller set in the age of the Medicis..."--Publishers Weekly

Kerryn Offord stumbled on to the 1632 universe in the beginning of 2003 when his father asked him to look up when 1633 would be released in paperback. He discovered Baen's Bar, and has been active in the 1632 conferences ever since. He has had over fifty stories published in the Grantville Gazette, and has plans for many more. Although Dr. Gribbleflotz is Rick Boatright's creation, Kerryn lays claim to creating Dr. Phil. Rick Boatright is exactly the same age as Bill Gates and like Bill has been a software developer since the early 1970s, but in Rick's case a developer for not-for-profit social service agencies. He's been a moderator of online forums as long as online forums have existed. Since 2001 he's been a writer and editor, as well as the Head Geek, for Eric Flint's 1632 alternate history world. He also held the Head Geek title for Jim Baen's Universe magazine. He is the perpetrator of the annual "Weird Tech" lectures associated with the 1632 minicon and was the creator of Ring of Fire series character, Dr. Gribbleflotz, the world's greatest alchemist.