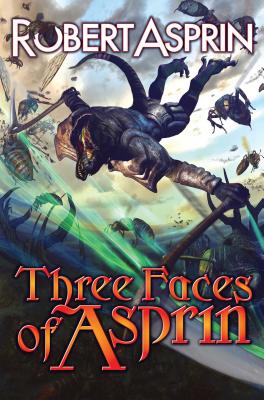 Three action packed science fiction novels by New York Times best-selling author and creator of the Myth Adventures series. Contains The Cold Cash Wars, The Bug Wars, and Tambu. TAKE THREE ASPRIN... The Cold Cash War
International conglomerates plot a complete domination of the free world, facing off against world governments in a calculated and vicious battle of wits and blood. The Bug Wars
The reptilian Tzen have battled their way to dominance in a hostile environment, honing their skills as fierce warriors and master strategists. They will need these abilities and more when the Enemy swarms toward the planet of Tzen. Tambu
For years the mysterious figure known only as Tambu has held the settled planets in his iron grip. The fleet of pirates and criminals under his command have established and maintained a reign of terror and extortion, successfully defying all efforts of the newly formed Defense alliance to halt or curb their activities. Now, for the first time, a reporter has been granted an interview with Tambu: the story will finally be told of Tambu's origin, his rise to power, and--most important--his philosophies and logic for running his force. If Tambu can be believed. And if the reporter is allowed to leave with his story.

Robert Asprin was the inspired creator of the long-running Myth series in which fantasy adventure meets comedy in a delightful pandemonium of magic and adventure. Asprin's Phule's Company saga, with its similarly irreverent look at military science fiction, was a New York Times bestseller. A fan favorite at SF conventions and an active participant in Society for Creative Anachronism mayhem, Asprin passed away in 2008.