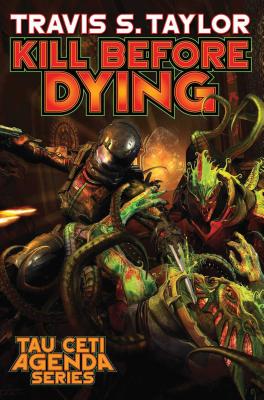 This is book number 5 in the Tau Ceti Agenda series.

BOOK #5 IN THE BEST-SELLING TAU CETI AGENDA SERIES, SEQUEL TO TRAIL OF EVIL. Humanity takes to interstellar space to face conflict and an extermination threat from an evil artificial intelligence, and an alien menace from beyond.

A century and a half after the Martian Separatist Wars, Alexander Moore returns to the stars with the Sienna Madira, a United States Navy supercarrier spacecraft outfitted with advanced FTL and endlessly strange, extremely effective, quantum-based weapons and remote sensing technology. And, of course, he's brought Marines, and lots of them. These are troops superbly trained for space battle, and equipped with advanced powered armor and artificial intelligence backup.

Moore's task: hunt down remnant weaponry platforms left by the brilliant, mad artificial intelligence known as Copernicus, the being ultimately responsible for the Solar System-wide civil war. Now Copernicus has formed an alliance with something else out there with a similar goal: wipe humanity from the galaxy forever.